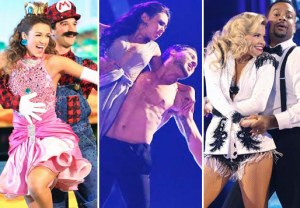 After another wild and wacky season of tangos and tears, salsas and cheers – not to mention one of the most closely contested finales in Dancing With the Stars history – Season 19’s momentous, Mirrorball-crowning moment of truth is upon us.

Would the ballroom’s most consistently excellent performer, Alfonso Ribeiro, maintain his form long enough to hold off two fiercely formidable female challengers — Sadie Robertson and Janel Parrish? Would it all come down to Tuesday’s last dance, the mega-challenging 24-hour Fusion Challenge? (Um, it might’ve… had all three routines not garnered 10s across the board from the judges!)

The ballroom crackled with anticipation throughout the two-hour live show, which was predictably jam-packed with feel-good filler – you really did want to see old faves like Betsey Johnson, Randy Couture and Michael Waltrip do encore dances, right? – plus high-wattage musical performances by Meghan Trainor, Nick Jonas, Jennifer Hudson and Gorgon City.

Before we get to the really, really, really big announcement — and a bevy of fun photos at the bottom of this post — let’s talk about…

DANCE OF THE NIGHT | In a night of insanely high-quality, downright perfect performances, is it possible to give out such an honor? Um, of course it is! Dancing a hyper-dramatic Fox trot/Paso fusion – to one of the greatest songs ever, Kiesza’s “Hideaway” – Janel and Val’s sizzling chemistry and ballroom synchronicity went “nuclear” according to Bruno Tonioli, while Len Goodman aptly noted “you combine the ‘how’ of the technique with the ‘wow’ of the performance.” The duo got no Mirrorball love, but it was also the dance of the finale. Why aren’t there ’11’ paddles for occasions like this?

PERFECT PADDLE MANIA! | Has there ever been a finale of across-the-board 10s? Sadie and Mark’s Samba/Quickstep fusion kicked off the domino of perfect paddles (this dance prompted Len to gush, “Yours is the Cinderella story … and you’re leaving a dancing princess”), and soon followed by Alfonso’s equally electrifying Cha Cha/Argentine Tango, which prompted Bruno to marvel, “you’re a legend man!” while Carrie Ann likened him to a “glitter ball” and Julianne called it “super tight and super clean.” Not a peep of criticism all night — and for once, it seemed utterly appropriate!

DIRTY ‘DANCING’ OUTTAKES | As co-host Erin Andrews pondered in the segment intro, this utterly real, hilarious and oh-so-naughty behind-the-scenes, dress-rehearsal footage should be a stand-alone special (pay-per-view style)! “My abs and ass will never look like that,” joked Andrews as she intro’d the DWTS female pros, while the sight of Tom Bergeron in jeans (and no tie!) musing, “One couple will be eliminated, and the rest of us will start drinking,” brought little jabs of joy to my heart. And the LOL-worthy glimpses of Tommy Chong, Betsey Johnson, and a panel of stand-in judges (who knew?) was wildly entertaining. More, more, more please!

IT’S A CAST REUNION! | All former snark about feeble-footed celebs aside, wasn’t it kinda great to see all 13 of the Season 19 celebs back on the ballroom one more time? And who didn’t want one last look at Betsey’s epic boa disaster?

BRUNO’S BIRTHDAY CAKE | OK, it was super brief and a total aside to the night’s bigger festivities (like the overkill of Season 19 repeat dances throughout the night), but seeing Bruno’s typically over-the-top personality suddenly transform into that of a charming, slightly embarrassed, but delighted little boy gave us another glimpse of off-script authenticity that really makes DWTS come to life. Happy birthday, mister!

And now for the real news: The Mirrorball goes to…

“I cannot believe this, I’ve wanted it forever!” said Alfonso, amidst wild cheers from the ballroom and his own tears.

“He deserves this so much,” added Witney, “he’s one of the most hardworking people I’ve ever met.”

And with that, it’s your turn. What did you think of the Season 19 finale? Did the right couple win? Are you already excited for the 10th Anniversary of DWTS coming next spring? Take our poll below, then sound off in the comments! 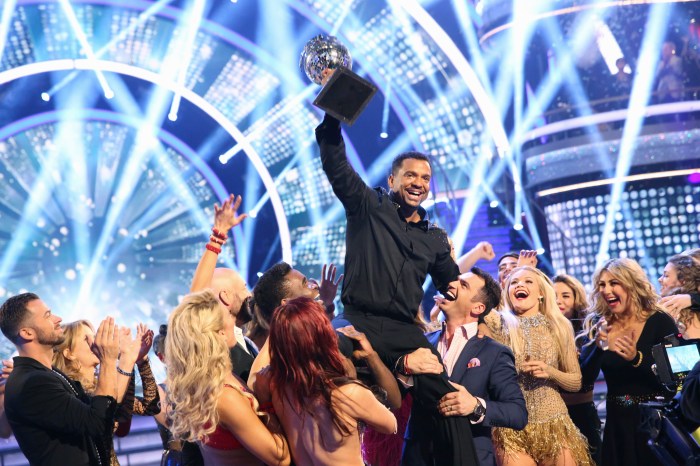