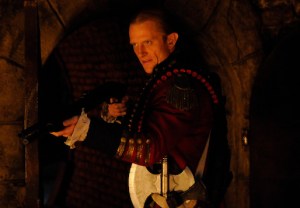 “So you know Ichabod dies?”

Relax, Sleepyheads. Neil Jackson is kidding as he kicks off an interview about the lead-up to Sleepy Hollow‘s fall finale. The two-part episode starts Monday (Fox, 9/8c), concludes a week later and features one heck of a game-changer — though not the one the actor faux-teases with a laugh.

The hour also brings Ichabod and Abraham face-to-face for the first time since their duel in the woods way, way back in the day.

“They expand the mythology of the necklace a little bit so that other people are now able to see Headless as Abraham,” the actor tells TVLine. “It’s a scene I knew was coming, and I was so excited to see when they finally wrote it.”

The beauty — and tragedy — of the former friends’ interaction, Jackson says, is that they’re so similar. 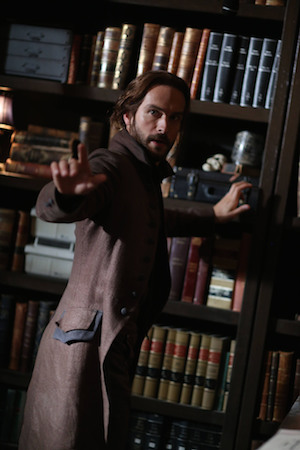 Jackson adds that one line, in particular, from the episode stuck with him.

“There’s a great phrase that [the writers] threw in there, when the two of them are arguing and clashing, where Abraham says to Ichabod that he was never meant to be the villain of the story. He was supposed to be the hero, and all that changed when Ichabod came on the scene,” he says.

Alas, even Abraham’s villain cred has been usurped this season by his brother-from-another-Moloch, Henry — AKA the Horseman of War.

“The way that I perceive Abraham to be is that he’s only got one foot in Moloch’s camp, and that Moloch was a means to an end so that he can enact revenge on Ichabod,” Jackson says. “If he was given the choice, he would choose Katrina over Moloch.”

That doesn’t mean, Jackson hastily adds, that Abraham trusts the witch. However, “All that he wants is to recapture his humanity, and his one chance at that, he believes, is to rekindle his love with Katrina.”

Humanity? Love? This is the same being who lobbed off Sheriff Corbin’s cranium with a red-hot battleax, is it not?

Though Jackson makes no apologies for Abraham’s extracurricular activities, he does get a little emo when talking about the horseman’s motivation.

“I mean, we’ve all had situations where we’ve lost something. But to lose every single thing in one moment, and it’s all directly as a result of one man’s actions? [Abraham] is just this bundle of angst, hate, pain and frustration, and it’s completely relatable,” the actor says.

But any fears about turning the Horseman of Death into someone who just needs a hug should evaporate whenever Jeremy Owens — AKA the stunt performer who provides Headless with his hulking body — strides onto screen.

“When you see [the Horseman of Death] walking around without his head, wielding an ax, there’s nothing necessarily lovable about that character,” Jackson says with a laugh. But, from the feedback he’s been getting, “the audience has become conflicted, because when they see ol’ stumpy running around with his flaming ax, they actually start to think of Abraham and that fragility,” he says. “Therefore, they feel some sort of sympathy for the Headless Horseman, which is amazing.”

He adds: “I mean, if you can create sympathy for the Headless Horseman, then it means they’re doing something right.”