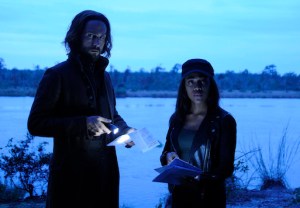 Abbie wears a hat throughout this week’s Sleepy Hollow, and I have a theory as to why.

I like to think that Lt. Mills woke up with flat hair, realized that her day would likely include activities like running for her life from a snake-headed monster and emotionally propping up her freaked-out fellow Witness, thought, “Screw it,” and crammed the cap on her head.

Because who cares about a cute ‘do when an world-ending demon is locked, loaded and ready to bring about the end of days?

Elsewhere, Irving makes a run for it and Katrina… well, Katrina looks quite lovely as she helps Henry and the Horseman of Death thwart Ichabod and Abbie’s every move. Nicely done, witch!

Read on for more details from the first half of the fall finale, “Magnum Opus.”

WHO’S THE LEAST USEFUL OF THEM ALL? | Abbie and Ichabod play Celebrity with their smartphones (she’s Cher, he’s George Washington) in an attempt to let their subconscious minds work out the problem of finding the weapon Lori said was in Grace Dixon’s journal. They’re interrupted by Katrina, via mirror, who informs them that Moloch is still alive. (Side note: You had one job, Katrina!) Ich tells his wife not to fret; once they find the weapon in question, they’ll be able to take out the horrid king themselves.

Unbeknownst to the redhead, after she steps away from the looking glass, Henry taps into the connection. Therefore, he’s able to see and hear as the Witnesses start with one of Grace’s clues and wind up at a nearby river that looks like the “Join or Die” snake — I realize that last sentence makes no sense, but just go with it, because Benjamin Franklin. 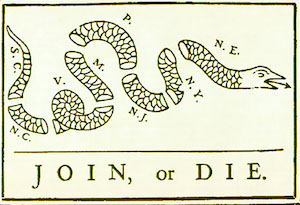 The Sword of Methuselah — which can take down Moloch — allegedly lies near that snakey river, so the Witnesses go looking for it. Henry tasks Abraham with getting the weapon before Ichabod and Abbie can find it.

Important to note: Ichabod says that he and the leftenant may run into peril. “Crane, you and I can’t have lunch without peril,” Abbie deadpans (ha!), but he means that, per some ancient prophecy or somesuch, they have to know themselves completely or they’ll die in pursuit of the weapon. No pressure!

PLAYING CHICKEN WITH THE HORSEMAN | The Witnesses follow the map to the ruins of an old building, a location Abbie instantly recognizes from her dream about her mom in the previous episode. “She’s been trying to lead me here all along,” Mills realizes. When the Horseman of Death shows up, he dislodges a plaque on one wall before coming after Abbie. He nearly gets her, but Ichabod distracts him by stepping out and basically saying, “Come at me, ye old bro.”

I am amused by how Ich follows this brazen tactic — he ducks down behind a stone wall and does some Lamaze breathing — but then the day dawns, and the light is enough to stop Headless from offing his old pal. “Good morning, sunshine,” Ichabod quips as Headless gallops away, smoking like my mom’s turkey that one Thanksgiving we don’t talk about. Abbie notes that they now have a day in which to find the sword before the horseman returns, and Ichabod apparently thinks that’s more than enough time, because he launches into a series of flashbacks and soliloquys, topped by an existential crisis.

ICH GETS DEEP | Let’s shorthand it, because we haven’t even gotten to Snake Face yet. Through flashbacks, we learn that Abraham was the one who suggested Ichabod give up his teaching position to come to America. There’s some fencing, some Ichabod-Katrina flirting and throughout it all, I’m entranced by Ichabod and Abraham’s prom-girl-hair curly side wisps. But that’s probably not what we should be focusing at present. 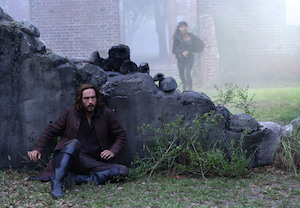 Because Ich is having a moment. “How do I know myself when at every turn, my life has been determined by others?” he laments to Abbie, who does not. have. time. for this. right. now. Buttressed by her newfound sense of purpose (thanks, Mama Mills!), she helps him get back on track. And just then, they figure out that the ouroboros on the plaque Headless took is a reference to a cavern hidden beneath the ruins. (Side note: Just don’t think about getting a tramp stamp of it, Abbie…)

IT STONED ME TO MY SOUL | They descend into a cavern full of life-size stone figurines that Ichabod quickly realizes aren’t statues: They’re everyone who’s previously come looking for the sword — and been turned to stone by the resident gorgon (AKA the aforementioned Medusa-like beast). So Mills and Crane scoot back to the surface and wait for dusk, when Headless will return and (hopefully) run interference for them, because no head = no eyes to see the gorgon = no turning to stone.

I’m a little fuzzy on exactly what Ich and Abbie discuss while they wait, because Fox cut in for a report from Ferguson, Mo., so if anything important happened then, shout it out in the comments. My broadcast continues just as Ichabod is telling Abbie that Lori would be proud of her — aww — but then Abraham is back and it’s time to roll!

While the Horseman of War fights the gorgon, the Witnesses slip past and find an array of swords ripe for the plucking. But which one is Methuselah? While Abbie’s trying to decide, Ichabod fights with Abraham, whose head he can see because the cave is enchanted.

“Our story is ever to be told by swordplay,” Ichabod tells his ex-bestie, and though I sorely want that to be a double entendre, it’s not. As they clash, Abraham blames Ichabod for all the bad stuff that happened to him (losing Katrina, dying, being all evil) and then needles Crane that the witch “always returns to me.” The reason that smarts, Ichabod? ‘Cause it’s true. Abraham continues that he was supposed to be the hero of this story, not the villain, which is sad and all but I REFUSE TO FEEL BAD FOR THE HEADLESS HORSEMAN.

HORN O’ PLENTY (O’ PAIN) | Now would be a really good time to come through with that sword, Abs! But when Mills chooses one, it — and all the others — turn to snakes that slither off. Abbie gets a glimpse of Abraham’s noggin before Henry blows a shofar, or ram’s horn (anyone else shout “Tekiah!”? Anybody?) that summons the Horseman of Death back to Fredericks Manor. Abraham chooses not to kill Ichabod, he says before leaving, because he’d prefer to watch him tortured in Hell for all eternity.

So the Witnesses are left, shaken and swordless, staring at the chalice of water in the middle of the room. Ich thinks they’re toast, but Abbie urges him to “Turn it around and decide to live.” Unspoken end to that sentence: “… before I put my petite boot up your Colonial doublejug.” It works; Crane bucks up and makes the observation that “It is through your eyes that I see myself most clearly.” Then they both acknowledge that their advantage is having each other, and they set the chalice — which is actually filled with oil — on fire. The move reveals a sparkly, glowing sword underneath, which Crane pulls out of the liquid and hoists above his head.

Get that sword to Fredericks Manor pronto, Witnesses, because Henry’s standing outside with Headless, the fiery manifestation of War, a horrified Katrina and a fully grown, really nasty looking Moloch. Translation: The war has begun for reals. 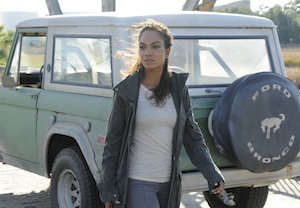 NORTHBOUND AND DOWN | While all of this is going on, Jenny transports fugitive Frank Irving to the Canadian border. But when they hit a roadblock, he has to tuck-and-roll into the woods. She gives him a burner phone and makes a loose plan to pick him up later, but you just know from the sad way he looks at her that he’s not coming back. A voicemail later confirms it. “When I see you again,” he tells Jenny, “I hope it’s in a better world.”