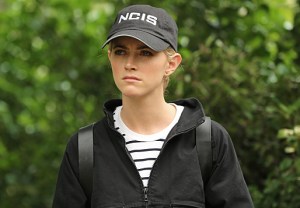 This Tuesday at 8/7c, a Thanksgiving-themed episode of CBS’ NCIS will serve a side dish of Bishop insight alongside a main course of terrorist drama, when the probie agent, her husband Jake and Agent Tony DiNozzo spend their time stranded at the airport investigating a threat to holiday travelers.

Coming on the heels of an episode which shed much-needed light on Gibbs’ kid-gloves treatment of Bishop, TVLine thought it time to check in with Emily Wickersham on that emotional reveal, Battlestar Galactica alum Jamie Bamber‘s debut as her TV husband and more.

TVLINE | Looking at the pictures from this week’s episode, it would appear that before we get to the high drama of it all, the whole team gets to meet Bishop’s husband. Does anyone offer immediate feedback?
Initially, when he first comes in, Abby (played by Pauley Perrette) is like, “Aww, Ellie, he’s adorable!” – in her Abby way. And then he meets the whole gang, with the exception of Tony. We meet Tony a bit later on.

TVLINE | That’s during the main thrust of the episode, when the three of you find yourselves stranded at the airport?
D.C. is having a very cold, snowy Thanksgiving, and Jake and I are off to Turks and Caicos for a much-needed vacation when we find out that all these delays are happening. Then, after we run into Tony (Michael Weatherly) at the airport and the guys get to meet, we find out that there is some chatter about a possible situation involving a terrorist, so we kind of spend the entire episode in the airport.

TVLINE | Is there the faintest whiff of Die Hard 2 amidst it all?
[Laughs] Uh, I guessssss you could say that, maybe….

TVLINE | Tony’s not charging across a snow-covered tarmac waving a pistol at a jumbo jet?
No. That would be awesome, but no.

TVLINE | What assistance is Jake able to offer, as an NSA attorney?
Well, he doesn’t really know what he has gotten himself into at first. He kind of lets Ellie take the lead and is in a lot of ways is in awe of her. He’d seen her do her thing when they worked together at the NSA, but he hasn’t really seen her in action at NCIS, so this is the first moment that he sees what she does every day. But Jake actually helps out with his NSA skills, which is pretty cool. What was interesting to play, and was an interesting thing to read on the page, 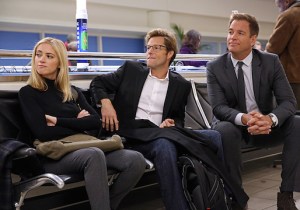 is that there’s this whole new dynamic in their relationship, because at the NSA they were able to talk about their days. But now with just him being in NSA, they can’t do that.

TVLINE | But would you still call them a “happy “couple?
Yeah! Definitely. I think everyone is going to absolutely love Jake.

TVLINE | How was Mr. Bamber as a husband? Did you join his fangirls in lamenting him not using his native accent?
I know! Jamie has a lot of great, great fans out there, and he has a wonderful accent. I’m sure many were disappointed that it wouldn’t be in the NCIS episode.

TVLINE | So, the last episode had a really important moment where Gibbs (Mark Harmon) called Bishop on the carpet, and they kind of worked through some stuff that neither of them quite knew had been in the air there for over a year now. Do you think that was always the plan, for it to be this deep-seated thing with Gibbs, where he was purposely allowing her to skate? Or could it have been written in in response to viewer reaction? 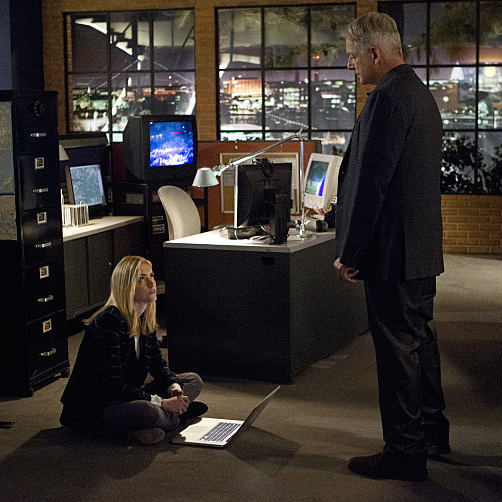 That’s a good question…. I think he did that because of the two agents that he had lost before. He was just trying a different approach….

TVLINE | But you don’t know for certain if that was [showrunner] Gary [Glasberg]’s plan from the get go? “We’re going to have Gibbs treat Bishop differently and not say why, but ultimately…”?
That’s a question for Gary; to be honest, I don’t really know. My take on it is Gibbs was just trying things differently. A lot has happened and come from that desk [where Kate Todd and Ziva David previously sat], and he didn’t want to tilt things one way or the other. He wanted to keep things pretty stable and forge ahead.

TVLINE | Did you ever wonder why the mighty Gibbs was so tolerant of your character’s quirks?
I like to think that he trusted Bishop all along and felt like, “She’s really smart, she’s super-capable. Although she has these weird quirks, she’s going to get the job done at the day.” It was a really fun episode to shoot, playing that sort of conflict. It shows a huge growth in their relationship and also for Bishop personally. It exposes this whole new side of her to fans.

TVLINE | Do you think she feels more a part of team as a result?
Yeah! To me she is more a part of the team than ever, but also she’s real. She’s flawed. She’s not perfect. She doesn’t get 100 percent on every test, she’s not as perfect as she, I think, first was written, which I loved.

TVLINE | As an actress, are you glad to no longer be sitting on floors and desks? Was it uncomfortable? Was your butt falling asleep?
Sometimes! [Laughs] On certain takes it was.

TVLINE | Looking back on your first year-and-change with the show, have you seen why TV’s most watched drama is TV’s most watched drama?
It’s interesting – when I first joined, I was kind of nervous all the time, especially at the very beginning. The No. 1 show in the world, these people had been working for so long….

TVLINE | You were filling a void of sorts…
Yeah. And I didn’t know what to expect. I knew how much this show impacts people around the world, but I’ve now seen, by working with them, that it’s about the chemistry between the cast and between the characters. All the hard work that everyone puts in every day shows on-screen, and that connects with people.

TVLINE | In today’s TV climate, it’s really something else to be drawing 20 million viewers a week [in Live+7], in Year 12.
It’s insane. Its pretty crazy when you think about it.

TVLINE | And they’re not doing it with aliens or sci-fi.It doesn’t have any big “trick,” just good stories.
It’s good stories, well-written. And again, the characters are like real people in the way that they’re quirky and not just one-sided. They’re weird, they’re smart, they’re very dynamic, which is what we are. It’s not like your regular procedural television show.