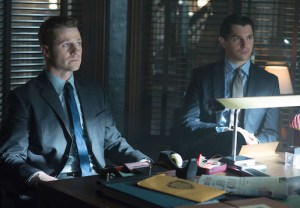 Gotham‘s fall/winter/midseason finale capped a strong run of episodes, gave rich dimensions to some secondary characters and teed up a provocative launching point for the second half of the season — even if its biggest storyline punch was spoiled by Fox itself.

I’m talking, of course, about the “Gordon is reassigned to Arkham” logline for the episode, which seemed curious but innocuous enough, until you realized that it was the very final payoff of the finale, after Jim’s pursuit of Lovecraft wound up with the fat cat shot dead, by Gordon’s own gun, putting the already prickly mayor in a public and political pickle.

Gordon’s confrontation of Lovecraft, antemortem, hinted at a new wrinkle in the Wayne murder case, in that someone knew something bad was about to happen and thus started buying up stock in the prestigious company — and Lovecraft seemed sincere in professing his innocence. Otherwise, save for Gordon’s ultimate demotion — to toil as a guard at the newly reopened Arkham Asylum, 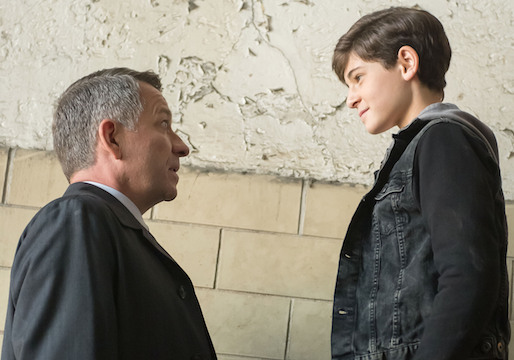 about as dreary a gig as a top cop can get — that story thread played second fiddle to the assassins who stormed Wayne Manor at the top of the hour in search of Selina, but instead only found themselves an arse-whooping at the hands of the family valet, er, butler. From there, the episode careered into an exciting two-pronged tale, one with Cat and Bat/Selina and Bruce learning to coexist on the mean streets and secret anterooms of Gotham (Hi, creepy-creepy Ivy!) whilst on the run, the other partnering Alfred with Bullock, as they sought leads on Miss Kyle’s whereabouts.

Sean Pertwee, who plays Alfred, was afforded many opportunities to shine, be it in hand-to-hand combat with multiple goons, quickly leveling Butch or calmly (and effectively) calling upon the teeny-tiny selfless part of Fish Mooney to lend a hand in their search. Seeing the manservant’s determination made the eventual reunion with Master Bruce all the more impactful and emotional, while the subsequent wink-wink moment with regard to Selina’s stealthy visit showed his appreciation for this new if noisy (and kiss-stealing!) person in his ward’s life.

Oh, and props to 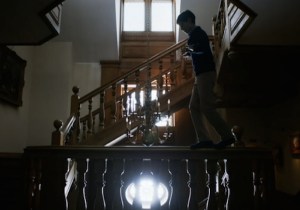 TV Guide Magazine‘s Damian Holbrook for mentioning this “Bat symbol” Easter egg, on Twitter. I was too busy questioning Bruce’s decision to walk a high bannister in slippery socks to notice.

What did you think of the midseason finale, “Lovecraft”?