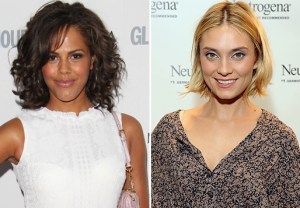 The student has become the teacher.

Former Greek coed Spencer Grammer is going to the head of the class as a series regular in Mr. Robinson, NBC’s upcoming Craig Robinson-fronted high-school comedy, TVLine has learned.

Additionally, Lenora Crichlow — currently co-starring in the Peacock’s just-cancelled sitcom A to Z — is also joining the series as a regular.

In Mr. Robinson, The Office vet portrays a struggling musician who leads a double life. At night, he and his brother Ben (not yet cast) jam in a rock band called “Nasty Delicious,” and their career has been going nowhere fast for a decade. By day, he has a gig that pays the bills; he’s a substitute Music teacher with the Chicago School District.

Grammar plays Ashleigh Willows, a Math teacher at Studs Terkel who moonlights as an exotic dancer to help pay off her mortgage and allow her to see the world during her summer breaks.

Crichlow co-stars as Victoria Wavers, a a former Wall Street trader who did very well for herself. She left the Street to pursue her true calling as a high school English teacher at Studs. She used to go to high school with Craig, who had an unrequited schoolboy crush on her.