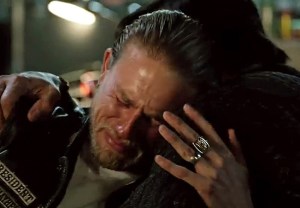 THE EPISODE | “Suits of Woe”

THE PERFORMANCE | Ever since Sons of Anarchy first revved its engines for the series’ final ride, we’ve anxiously awaited the crucial moment when Jax would learn the identity of Tara’s true killer. We knew that moment wouldn’t come until late in the season — Episode 10, to be exact — and we knew that Jax would likely come undone as soon as he discovered his own mother murdered the love of his life.

What we couldn’t anticipate, though, was just how breathtaking Charlie Hunnam would be in his portrayal of a man learning of a devastating betrayal.

For most of Sons’ final season, Jax has shown mere glimpses of the heartache he feels over Tara’s death — a few somber monologues around the table with his SAMCRO brothers, a sudden wave of emotion after sleeping with prostitute Winsome. Deep down, Jax has been hurting; Tuesday’s episode allowed Hunnam to bring that pain to the surface in the most spectacular way.

As Jax sat across from Juice (an also-terrific Theo Rossi) and heard the exact words he was hoping he wouldn’t — “She must have gotten in a brawl with Gemma” — Hunnam didn’t have to say a word to communicate Jax’s grief. Instead, you could see it in the way his shoulders shook, in the way he hung his head, in the way his eyes flickered past confusion, anger and despair in a matter of seconds. Many Sons fans considered the season’s first 10 episodes an opening act for this moment when Jax would learn the truth — and Hunnam did not disappoint.

Later, as Jax commiserated with Nero about Gemma’s betrayal, Hunnam once again lowered his character’s guard in a way we hadn’t yet seen. “How could she do this to Tara?” he sobbed, holding his head in his hands. “How could she do this?” And them with a mixture of horror, shame and grief, he admitted that, despite Gemma’s actions, he still loved her. “She’s my mother,” he wailed.

There is perhaps no character on TV right now who’s quite as conflicted and tormented as Jax Teller. With so many of us anticipating Jax’s anguish in this week’s episode, Hunnam had a tall order to fill — and his performance exceeded all expectations. 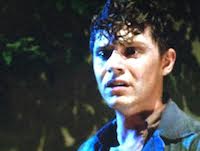 HONORABLE MENTION | “I know who you are.” When American Horror Story: Freak Show’s Jimmy said those five words to Dell, revealing for the first time that he was aware the strong man is his father, the lobster boy’s portrayer, Evan Peters, released so much sadness with his tears that we didn’t just want to give him an Honorable Mention, we wanted to give him a hug. What followed, as Jimmy begged Dell to admit it was true, was nothing short of a master class in vulnerability. Between this scene and the actor’s face-off with Jessica Lange and his impressive rendition of Nirvana’s “Come as You Are,” we can only conclude that — in the best of all possible ways — he’s a total freak. 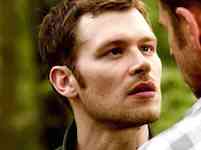 HONORABLE MENTION | “Have I made you proud, father?” It’s not every day six simple words send an icy chill running down our spines, but then again, it’s not every day those words are delivered with acute precision by The Originals‘ Joseph Morgan. Monday’s episode forced Klaus to face his estranged father after centuries, and while the exchange was difficult for the immortal orphan, the true burden fell on Morgan, who channeled his character’s rage, pain and fear into a silver bullet that shot straight through viewers’ hearts. The look on Klaus’ face as he held his dying father in his arms will haunt our nightmares — and our DVRs — for eternity.