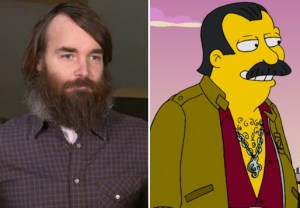 The Simpsons is finally putting a face to one of Springfield’s most notorious names this Sunday (Fox, 8/7c) and TVLine has an exclusive behind-the-scenes look at the big reveal.

Former SNL-er Will Forte is lending his voice to King Toot, the never-before-seen owner of the music store next to Moe’s Tavern, and as you’ll witness in the video below, he doesn’t exactly see eye-to-eye with his neighbor.

And if executive producer Matt Selman has his way, this won’t be the last we see of Forte’s Toot!

“Hopefully, if the character is a runaway success, he will return in other King Toot adventures,” Selman says in the video. “Possibly King Toot webisodes that [Forte] doesn’t know about.”

Hit  PLAY on the preview video below, then drop a comment with your thoughts on the King’s long-awaited arrival.