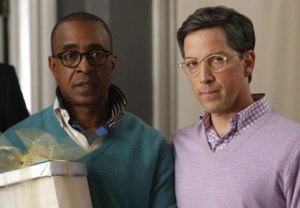 Marry Me is making a serious commitment to one of its stars.

Dan Bucatinsky, who portrays one of Annie’s (Casey Wilson) gay dads on the NBC comedy, has been promoted to series regular, per The Hollywood Reporter.

Bucatinsky — who also exec-produces the Lisa Kudrow comedies The Comeback and Web Therapy — currently appears as Kevin 2 on Marry Me, alongside recurring player Tim Meadows as Kevin 1.

Are you excited to see more of Kevin 2 in the near future? Tell us in the comments!