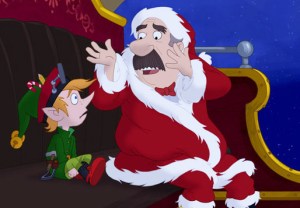 What happens when a Simpsons scribe (Mike Reiss) grabs hold of the reins from Santa’s sleigh? Thanks to NBC, we’re about to find out.

How Murray Saved Christmas, premiering Dec. 5 at 8/7c, tells the story of a disgruntled restauranteur (voiced by Jerry Stiller) who reluctantly embraces the Christmas spirit when he’s forced to take over for Santa Claus — and TVLine has an exclusive clip of Murray’s first bumpy ride through the skies.

Perhaps the journey would go a little more smoothly if Murray bothered to learn the names of his reindeer, though we do appreciate hearing Stiller say “Cosmo” and “Kramer” again.

Other familiar voices in Murray include John Ratzenberger (Cheers) as Officer Bender, Jason Alexander (Seinfeld) as Doc Holiday, Sean Hayes (Will & Grace) as Edison Elf and Dennis Haysbert (24) as the narrator.

Hit PLAY on the preview clip below, then drop a comment: Will you be watching Murray next month?