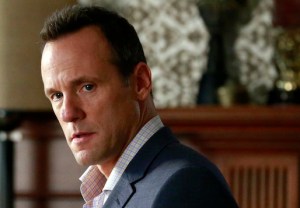 The perpetually twirling cheerleader did it.

OK, not really. But How to Get Away With Murder‘s Tom Verica says that’s the craziest of all the crazy theories he’s heard about who killed his character, Sam Keating, on ABC’s twisted freshman drama.

Verica, who was as befuddled as the show’s fandom until he got the script for tonight’s winter finale (10/9c on ABC), says that at one point, he joked to the show’s writers that perhaps Sam should trip and fall onto the fatal Scales of Justice statue that’s smeared with his blood.

That option got squashed, as well.

TVLine caught up with Verica to try to squeeze out some intel about the “Who Killed Sam?” mystery, to dish his character’s complicated relationships with wife Annalise (Viola Davis) and her right-hand woman Bonnie (Liza Weil) and to get the inside scoop on his character’s very revealing selfie — the one that will forever be associated with the line “Why is your penis on a dead girl’s phone?”

TVLINE | In the previews for the finale, it looks like Michaela is hiding behind a door. It also looks like Sam’s trying to break down a door. Can you tease a little bit of what we’re going to see at all?
Well, Michaela’s hiding behind a door. It looks like Sam’s breaking down a door. Yes. [Laughs.] There may be some other people involved. I have to be very careful about this because I now know all the events that happen on Murder Night. All the chickens are coming home to roost, and those lies come out, and Sam is fighting for his life, and there are elements that really create an event that…I’ve got to be very careful about this. [Laughs.]

TVLINE | Some TVLine readers have said in our comments section that if Sam’s murder turns out to be a case of self-defense, that would be a disappointing outcome. Any thoughts on that?
Well, it’s complicated. There are certainly… all theories are on the table. Everyone will be surprised about how it happens. It’s done in a way that I don’t think is predictable in any way, shape, or form. 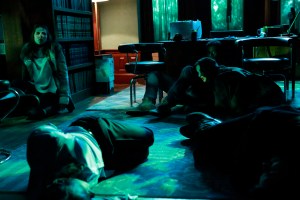 TVLINE | The title of the Winter Finale is “Kill Me, Kill Me, Kill Me,” and I know that thus far this season, every episode title has been a piece of dialogue from the episode. So I’m wondering now, does Sam say those words? Or does someone else? Is that a piece of dialogue from the hour?
I would say that consistency is something they do here. [Laughs.]

TVLINE | [Laughs.] Fair enough. I know you have to be careful about spoilers. So here’s an easier one. Is that actually you on the dead girl’s phone, or is that a torso double?
That is me. Yes.

TVLINE | Did someone ask you to take the selfie? How did that come about?
It was so matter-of-fact. We finished shooting, and it was, “Oh, we need this shot that we’re going to put on the phone. It’s just going to be the wallpaper in the back.” They had a photographer there, and they took a couple different pictures… we did it in 30 seconds; it wasn’t like we had a set up photo shoot or I had time to go do push ups, or body makeup, or any of that stuff. It literally was done down and dirty. I had no idea the impact it would have or that it’d be shown so much.

TVLINE | So, Sam Keating, is a character who, for a good portion of the season, you’ve had to play him as a dead man. We see you on the office floor. We keep seeing you dragged out into the woods and set afire. Did you film all that at one time at the top of the season, or have you had to play dead every week of filming?
I never went out to the woods, actually. [In those scenes], Sam is always inside the rug, and the one part that is the reveal in the pilot, where they do the closeup [of my face] with the flicker and the flame, I actually was laying on the streets of Philadelphia. As far as everything else, yes, we have had to revisit Murder Night, as we call it, multiple times. That particular scene, we’ve we see it through different character’s perspectives. It’s funny: Me and that rug have become very close. I know exactly where my mark is. There’s never any discussion about what position my body is on the floor, or where I got hit, or how much blood.

TVLINE | Is there a secret to playing a murder victim?
Well, the biggest challenge…the stillness is okay. In fact, it gives me a little respite during my day to just kind of gather my thoughts and relax a little bit. The challenge is the eyes, and we decided in the pilot that I would be dead with my eyes open. So that’s been probably the most challenging aspect of it, particularly when there’s a longer take, longer camera shots that drift. I can pretty much contain and limit the amount of breathing that I have to do, but it’s holding the eyes open the whole time and not wanting to blink, that’s hard. After a period of time, it’s like playing a staring contest with a sibling when you’re 10 years old, only it goes on much longer, and since I’m laying down, the eyes start to water up. So, it’s really fighting that off. Wanting to blink or wanting to clear your eyes has been the biggest challenge. 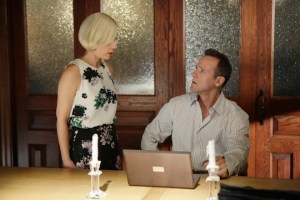 TVLINE | In Episode 8, last week, can you walk me through your scene with Bonnie on the porch? I mean, Sam’s already told so many lies at this point, and then in trying to win her silence, he leans in and kisses her. And they’re right out there on the front porch of his and Annalise’s house — for all of Philadelphia to see! I was like, “You know what? This guy kind of has it coming!”
Let me just preface my answer about my kissing Bonnie on the porch by saying… my [character’s] wife did, in the first episode, have sex in the office in our house with someone else… [Laughs.] I’m not comparing. I’m just saying it’s a bit complex.

Now, that being said, in all seriousness, I think the relationship between Bonnie and Sam, we feel that there’s a history from her standpoint of some kind of pining, or an attraction. Liza [Weil] and I had come up with the idea that there’s a real connection, not in a romantic or sexual way, but a real ease of conversation between them. Sam also recognizes and identifies her attraction [to him], and in this pivotal moment, he is this desperate man making very desperate decisions. And once he realized that this wave of lies had been catching up with him and he’s just very beneath this wave, he resorts to just the worst decision in making the move on her and kissing her, hoping that that would maybe convince her to keep this information concealed. There are really a number of levels to their relationship — and that was really fun to play because it was initially very difficult for me to wrap my head around that decision he was making.

From my character’s standpoint, though, the whole thing comes back to being implicated for murder. And whether he is responsible or not, I still don’t know the answer to that, but remember that his wife, she’s the last [chance] of having somebody who will be behind him and can do something for him. That’s the most important thing to protect, and Sam makes probably not the best choice in how to try to hold onto that.

TVLINE | Will Sam live on after the Winter Finale? Because, obviously, the “who killed Sam?” question is getting wrapped up, but the “who killed Lila?” question is still in the mix.
Honestly, I don’t know. It’s been talked about, and I’m more than willing to come back and play. It has been suggested that there may be more [episodes for Sam]. I am back in Episode 10, briefly. Beyond that, they’re not there yet. I think they have six more episodes [in 2015]. The writers are very talented, though, so if there is a way and there is something for me to do to come back, I’d be happy to.