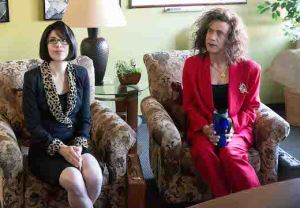 If you’ve ever wondered what Women & Women First looked like long before it opened its doors, Portlandia‘s fifth season — bowing in January — is for you.

Expect the episodes to go deep with your favorite characters, such as feminist bookstore owners Toni and Candace, who’ll reveal how they came to open Portland’s lady-championing storefront.

Elsewhere in the season: Bryce and Lisa’s taxidermy business is vandalized, Fred and Carrie try to buy a home in Portland’s high-stakes real-estate market, Lance and Nina look into couples’ therapy and Kris and Malcolm publicly fail as parents.

Looking forward to another trip to Portlandia? Press PLAY on the first Season 5 trailer below, then us about it in the comments!