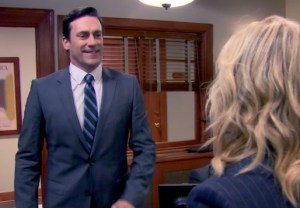 Has Jon Hamm won back his job at Parks and Recreation?

The Mad Men actor will reprise his role as fired National Parks employee Ed during a Season 7 episode.

Hamm briefly appeared in the Season 6 finale when the show jumped ahead three years to reveal Leslie’s new workplace.

* TV Land has pulled repeats of The Cosby Show from its schedule following ongoing and new allegations of sexual assault by the entertainer, per The Hollywood Reporter.

* Comedy Central’s The Nightly Show With Larry Wilmore (fka The Minority Report….) will premiere on Jan. 19 at 11:30/10:30c, our sister site Deadline reports.

* TBS will air the primetime special Conan To Go on Dec. 18 at 10 pm, featuring the host’s favorite remotes from the past four seasons.