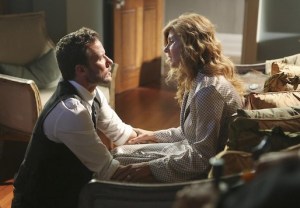 It is neither polite nor karmically prudent to delight in others’ misfortunes, so even though Rayna and Luke spend most of this week’s Nashville greasing their sleds for the inevitable luge ride to their breakup, let’s focus on other things, shall we?

Aren’t all the dresses lovely? Isn’t it nice to see Juliette and Avery getting along? Isn’t Teddy a giant idiot for doing what he does, where he does? Aren’t —

I’m sorry, I tried to be good, but I can’t! Rayna and Luke have a terrible night at the CMA Awards — y’know, aside from her bringing home trophies like it’s her job — and the relationship cracks we saw in last week’s episode become giant chasms separating the First Lady of Country Music from her petulant, drunk, petty fiancé. And it makes me so happy!

Forget caring about who made Rayna’s gown; I’m more interested in the look of sad realization she wears throughout the evening — and what it’ll mean for the episodes ahead. We’ll get into the particulars as we review what happened in “You’re Lookin’ at Country.”

HOLLER ‘LUKE WANT PRE-NUP!’| As Rayna and Luke get ready for the ceremony, there are three things you need to know. 1) Her dress is absolutely beautiful and would make a much better wedding gown than the number she tried on at the store a few weeks back. 2) Rayna is up for six statuettes that evening; her betrothed is up for five. 3) While helping Luke search for his acceptance speeches, Rayna stumbles upon a pre-nup in his bag.

“I figured it was a given,” he says, but she’s of a different mind. Still, in the limo on the way to the event, she says she’s fine with the agreement — good thing you didn’t go out for a role in the Patsy Cline movie, Rayna, with acting skills like that — and he explains that his ex-wife took half of everything he’d made his entire life. They sort of table their talk, but you can tell it’s not far from the redhead’s mind.

CAN’T UN-RING THAT BELL | Once the awards start, though, Ray’s got bigger problems: Every time she goes up on stage to accept, she thanks other guys (Deacon for co-writing “This Time,” Liam for producing her album) instead of Luke. And the male half of “Ruke” certainly notices. 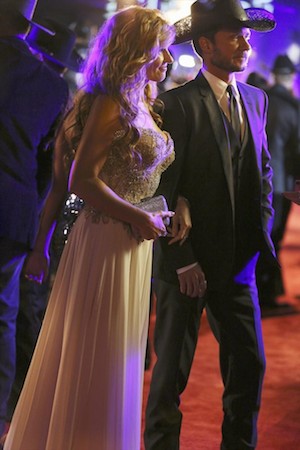 So he drinks a lot and makes faces and generally is a giant boor. He does pull it together for a moment, though, to reassure a shaky Sadie that even though her ex — who’s been texting her that evening — claims he’s responsible for her success, she got to the awards show on her own merits. (P.S. Sadie eventually plays an awesome song and wins the new artist award, so suck it, Pete!)

But when “Ball and Chain” picks up an award, Luke crowds Rayna out of the acceptance speech. She later follows him into the men’s room (side note: who else thought for a moment that Rayna was going to bust in on Teddy making his hooker hook-up, AKA Ol’ Leopard Panties, purr?) to ask what the frilly heck he’s doing. Their argument goes nuclear when Luke drops this bomb: “The only reason your album went gold was because I proposed on the day you released it.”

At home, a sober Luke sheepishly apologizes. “I wanna feel like we’re in this together,” she tells him, and he assures her they are. While he’s in the shower before bed, Rayna gets a congratulatory text from Deacon, who watched the awards at home with Scarlett. Rayna’s face as she peers at her phone? It is conflicted.

MEET THE PARENTS | Juliette and her bump look gorgeous in a black-and-nude, long-sleeved number, but when she’s introduced to Avery’s parents on the red carpet (as you do), all his father can see is a trainwreck of a person who’s going to fail at raising his grandchild.

His disdain, coupled with the fact that it’s about a year since Jolene’s death, causes Ju to have several flashbacks to her mother’s shoddy parenting. Just as she starts to believe that maybe she will be a bad mom, Avery stands up to his judgmental, unforgiving father (and kinda realizes that maybe he’s been acting the same way to Juliette) for the both of them. Then Juliette accidentally lets it slip that their baby is a girl — “I had to peek. I peeked!” — and they hold hands. “We got this,” he promises her. 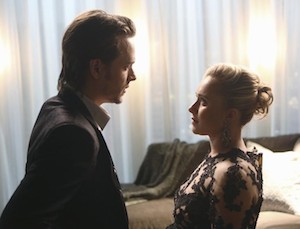 Later that night, Avery’s hand lingers a little too long as he helps Juliette unzip her dress, and he eventually leaves but WE’RE BACK ON THE PATH, PEOPLE!

ELSEWHERE IN THE AUDITORIUM | Layla is even more unhappy than normal when she realizes, during a duet with Will at the show, that the reality show has turned him into a sex symbol who’s far more popular than she is. (Side note: Layla, honey, this is news?) She tries to stand up for herself by announcing, as she and Will present, that she deferred Harvard, but no one cares. (Anyone else think that she was going to out Will during the live telecast?)

Zoey and Gunnar bring Micah to the ceremony, with Zoey seething about being a forced faux mom the entire time. It’s unfortunate, then, that while Gunnar’s taking a call and she’s happily entertaining Jeff Fordham’s request to hear her demo, Micah goes missing. Gunny freaks when he finds out, and the pair spend the rest of the evening yelling at each other and running around the venue in search of Gunnarspawn.

The boy is eventually found — he went to the bathroom and got lost on the way back — but this is the end for two-thirds of the ZAG Band: Zoe tearfully tells Gunnar that she can’t pursue her dreams the way things are now between them, and winds up crying, “I didn’t know where else to go” on Scarlett and Deacon’s doorstep.

Now it’s your turn. Didn’t you love how quickly Deke’s head spun when Scarlett said Rayna looked pretty? Wasn’t it beyond time for Gunnar and Zoey to part ways? Are you as assured of a Juliette-Avery reunion as I am? Thoughts on Luke’s extended tantrum? Sound off in the comments!