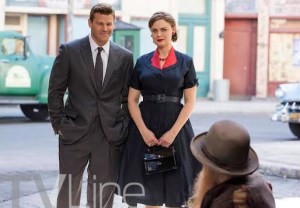 The following promo offers a brief glimpse of the Hitchcockian-themed installment, airing on Dec. 11. As we previously reported, the out-there hour finds Booth (now a jewel thief), Brennan (now an LAPD officer) & Co. rerouted to the ’50s for reasons that are not yet clear.

“We’re examining the beginnings of Booth and Brennan in another situation,” exec producer Stephen Nathan recently explained. “Their jobs might be different, but their characters are the same to a large extent.”

Press PLAY below and then hit the comments with your snappy judgements.