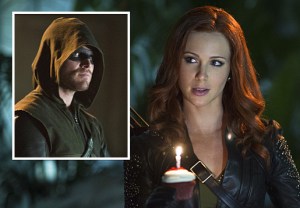 Albeit three months early for Valentine’s Day, Cupid makes her bow tonight on Arrow (The CW, 8/7c), setting her sights on Starling City’s enigmatic vigilante and anyone who ostensibly could come between them.

Amy Gumenick — whose previous TV credits include AMC’s TURN and the role of Supernatural‘s Young Mary Winchester — shared with TVLine a look at Cupid’s mission and whether the Arrow’s super-ardent admirer might figure in the ongoing “Who killed Sara?” mystery.

TVLINE | Now, I spotted you in the background of at least one other scene last week, before Cupid revealed herself the end. But was there a second Easter egg?
There were two. We see her outside of the gym as Laurel’s exiting, and we see her again walking past Diggle’s van.

TVLINE | I am admittedly rather in the dark about this DC Comics character. What’s Cupid’s deal?
Well, Cupid is a supervillain, as described by the DC comic book world. She exudes extreme strength as a martial artist and as a hand-to-hand fighter, and she also has an extreme emotional capacity. She’s definitely a bit mentally unstable and will meet no ends to get what she wants. Fundamentally, she is driven by love and will fight anyone and face anything for her love.

TVLINE | OK, so she just wants to be loved.
Exactly. [Laughs] See, she’s not that bad!

TVLINE | Who was Carrie Cutter before she started stalking Arrow and killing “for” him?
Carrie worked as a cop for many years. She also worked in the military. She was asked — or forced, if you will — to leave law enforcement because of her unstable mental state.

TVLINE | Is that why we see her being “familiar” with Quentin Lance in the promo?
[Coyly] I believe so…. She has definitely crossed paths with these guys before, and though her badge was taken away, in her mind she is still doing [the job]. In a way, in becoming Cupid she found a way to get to and solve the crimes before they happen, rather than arriving after the fact.

TVLINE | How long as Carrie been carrying this torch for the Arrow?
This isn’t a sudden “love at first sight” situation. Perhaps it feels that way, but once she makes her mind up that he’s “the one,” she is determined to get him. How far back that goes is open for interpretation. 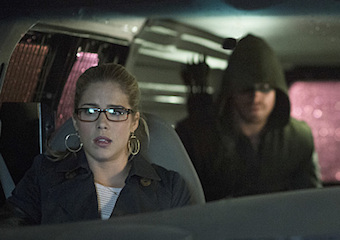 her obsession is the Arrow, and not Oliver Queen, is Felicity perhaps seen as a threat? Or Laurel…?
I think that they are potential threats, but I don’t think Cupid is too worried about them.

TVLINE | In her quest, does Cupid make use of or “have her way with” other men?
Oh, absolutely. She has been in love, as touched upon in the comic books. But there is something different and bigger and more powerful about the love that she feels for Arrow. And yet she is a woman who knows how to get what she wants, so there’s definitely some manipulation, definitely some perhaps “inappropriate” use of other men…. She will do whatever it takes.

TVLINE | Because of her thing for Arrow, and because she obviously has some archery skills, are we going to wonder if it was she who killed Sara?
That question definitely is raised…. In the comic books, Black Canary is a big rival of Cupid’s; she sort of is the biggest obstacle in the way of her getting Arrow. So if I were investigating Sara’s death, I would definitely question her.

TVLINE | Who do you get to interact with most, of the main characters?
Most of my interactions are with Stephen [Amell]. But Arsenal (played by Colton Haynes) gets in my way, so I have to take care of him. And there are a few of Arrow’s enemies that I present to him as “gifts.”

TVLINE | How many episodes can we expect to have you around for?
Good question. We are discussing and plotting for future adventures, so there will hopefully be more. How many, I don’t have a number…. But there is definitely unfinished business that Cupid will return to take care of.

TVLINE | [Showrunner] Marc Guggenheim told me that this episode ends in a way that “will suggest exactly how and when and under what circumstances we’ll see Cupid again.”
Ooh, I like that! [Laughs] Let’s stick with that story.