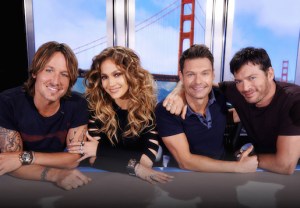 Fox will kick off the reality singing competition’s Season 14 premiere that night with a one-hour episode at 8/7c, then wrap it up with a two-hour installment on Thursday, Jan. 8 at 8 pm.

Keeping with a theme, the network also will premiere its new music-industry drama Empire on Jan. 7 at 9/8c. The series, starring Terrence Howard (Law & Order: L.A.) and Taraji P. Henson (Person of Interest), follows a family vying for control of a hip-hop empire and features a soundtrack by Timbaland.

Psyched for Idol‘s return? Can’t wait to see and hear Empire? Tell us about it in the comments!