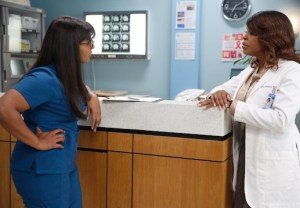 Remember the end of Bridget Jones’ Diary, when Mark Darcy finds Bridget’s journal and she thinks he’s left her, but he’s merely gone out to buy her a new blank book? Something very similar happens in this week’s Mindy Project; it’s too bad rom-com addict Mindy is completely unaware that anything of the sort is taking place.

During the episode, we learn that Mindy had a crush on Danny for quite some time, Jeremy’s a master calligrapher and Morgan provides excellent turn-down service.

Read on see what other treasures “Diary of a Mad Indian Woman” yields.

WHAT DO WE HAVE HERE? | Mindy — sporting some bangin’ bangs — and Danny bicker about how he never wants to spend the night at her place. After he inadvertently kicks her in the face, she sports a bedazzled pink eyepatch and guilts him into staying at her apartment that evening.

“Oh my God, it’s like Grey Gardens in here. I’m going to be smothered by a collapsing tower of tchotchkes,” he complains as he walks in, but he’s soon distracted by Mindy jumping him on her couch. However, a call from Dr. Fishman means Min’s got to run to the hospital (more on that in a minute), so she tells Danny to make himself at home.

So he does, and when a buzzing noise comes from Mindy’s bedside table, he opens the drawer to investigate. “Ah, Mindy’s got the same neck massager as Ma,” he says, turning off the buzzing offender, and GOOD GOD DANNY, YOU’RE A GYNECOLOGIST. FIGURE IT OUT. (Also, ha!) While he’s in there, he finds Mindy’s diary.

Of course he reads it.

SCENES FROM A COURTSHIP | For the most part, Danny likes what he sees in the pages. Mindy writes about how she had a crush on him when they were residents together (“his lips were like plump hot dogs”), had sex dreams about him even when he was a jerk to her (“Way to go, Danny Jr.,” Castellano says to his tush), and couldn’t believe it when he kissed her on the airplane (“It was the moment I had dreamed of for years”).

But Morgan’s surprise visit — there for the turn-down service mentioned earlier in the ep, perhaps? — jolts Danny so much that he accidentally knocks a glass of red wine onto the diary, staining the pages. Oops.

THOSE WHO CAN’T… | What’s Mindy up to while her man is snooping around her pad? She’s fulfilling her Dr. Fishman-mandated teaching rounds at the hospital, though she tries to get out of it by sending Tamra in her place. When Mindy eventually shows up, she tries to champion a shy female student by ignoring a brash male student… and winds up with sexism complaint against her.

Fishman demands that Mindy make things right, so she finds the male student in the hospital gym and — after a pretty funny sight gag that has them both flying off side-by-side treadmils — explains to him that he reminds her of her as a med student: smart, cocky and not too careful about other people’s feelings. “If you’re a doctor who doesn’t know how to get along with other people, then you’re a bad doctor,” she tells him… before drinking all of his sports drink.

THE WRITE STUFF | Meanwhile, Danny tries to cover his tracks by having noted forger Jeremy recreate Mindy’s diary so she won’t know Danny read it. “When I got my calligrapher’s license, I swore I would only use it for good,” Dr. Reed protests, but caves when he realizes how a Mindy-Danny break-up would incapacitate the practice for a very long time.

But as he’s copying the entries, Jeremy draws Danny’s attention to a recent one: After an evening where Mindy thought Danny was going to propose — he merely wanted to rail against new New York City Mayor DiBlasio — she wrote, “If he doesn’t propose by Christmas, I might have to move on.”

Danny says it’s too soon, because they’ve only been together seven months. But Morgan and Jeremy disagree. And when Danny fills his mother in on what’s happening, Annette says Mindy’s too old for Danny to mess around with: “If you know you’re not gonna propose,” Ma says, offering the most helpful advice she’s given since we’ve met her, “you’ve gotta end it.”

DANNY DECIDES | And when Mindy says she’s heading home unexpectedly, Danny does one of his all-out runs to her building, scales the fire escape and returns the forged diary to her bedroom before she realizes anything’s amiss. But when she asks him to stay, he freaks and reacts as though she’s talking about marriage. So when she says, “Do you wanna stay or do you wanna go?” and he replies with the latter, it seems like a big, heavy, this-will-lead-to-heartache thing.

But a moment after he leaves the apartment, he’s back, grousing about how she doesn’t lock her door and how she’s sleeping on his side. So much drama, Min, and this time you weren’t directly responsible for any of it! That’s gotta be a new world record, right?