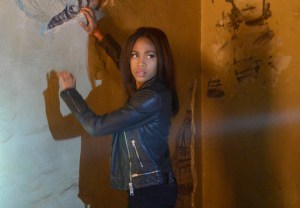 The next time your mother won’t leave you alone, before you get all up on her case about it, double-check to make sure she’s not just trying to keep you safe from a malevolent spirit that wants to feast on your tender soul.

This has been your Lori Mills-approved tip from this week’s Sleepy Hollow, which brings Abbie and Jenny’s mom back into their lives for an interlude that’s equal parts sweet and scary.

The hour also gives Nicole Beharie and Lyndie Greenwood plenty of time to shine, and as the Mills sisters relive some tough childhood times, the actresses don’t disappoint.

Plus: Irving’s escape! Stuffed-up Crane! Minimal Hawley! The episode is basically everything that certain commenters have been asking for since the beginning of the season. Find out how it all goes down as we review “Mama.”

MEMORIES OF MOM | The episode opens with Abbie in Purgatory, as a creepily haunting version of “You Are My Sunshine” filters through the smoke and shadows. She sees a hooded figure and asks, “Mama, is that you?” Just as the figure warns Ab about demons, Ichabod sneezes loudly… and we realize that she was just dreaming during a catnap in the archives, and Crane’s honker woke her up.

Abbie notes that she’s been dreaming about her mother, Lori, all week for some reason. Ichabod says some stuff but he’s so congested that I pretty much just giggle the entire time. When Abbie gets a call from Reyes, the lieutenant insists that her fellow Witness stay put and get some rest — she even tucks him in! — while she investigates.

OLD HAUNTS | Tarrytown Psychiatric Institute has had three suicides in three days, Reyes briefs Mills, when it normally only sees one or two a year. She puts Abbie in charge of the investigation, and Jenny tags along — even though being back at the hospital isn’t her idea of the best day ever. The sisters notice a troubled-looking man near the hospital’s entrance, but a kindly nurse escorts him away before he can do or say much.

After a brief consultation with Irving, who notes that he knew the first victim and the guy wasn’t suicidal, Jenny and Abbie review surveillance footage of the man’s death. As he hangs himself in the video, they notice a flicker in the corner of the room. Further examination reveals the ghostly shape of a woman — and the sisters recognize her instantly. “That’s Mom,” Abbie says with wonder. “Back from the grave.” 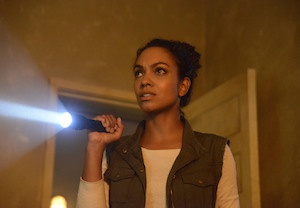 ICH DISCOVERS JEWISH PENICILLIN | Abbie returns to the archives, where a churlish Ichabod still doesn’t feel well. As she reviews her mother’s medical files, she flashes back to Lori freaking Little Abbie and Little Jenny out by yelling about demons and making them chant the family motto: “Eyes open, head up, trust no one.” Ab grimly declares that her mother is behind the Tarrytown Psych patients’ deaths.

Just then, Hawley shows up with “one of God’s greatest creations: matzah ball soup.” Ichabod complains… until he takes a big swallow of the broth, blisses out (that face!) and mutters, “That is somewhat comforting.” (Heh.) Unbeknownst to Crane, Hawley has dosed the soup with something Nyquil-ish; pretty soon, Sickabod is snoring.

NOT-SO-NICE NURSE | So Hawley accompanies the Mills ladies back to TPI. Their mission: Stop the killings and help Lori find peace. When they see the patient they met at the hospital’s entrance start to hack at his wrist with a shard of something sharp, they stop him just in time — and when Lori appears in the room, she sucks Abbie down to an abandoned wing of the hospital.

Ghost Mom is barely able to eek out “It’s not safe for you here” before Gina Lambert, the nurse we met earlier, shows up and wonders what Ab’s doing. Rather than saying “I kinda disapparated,” Abbie covers and eventually reunites with Hawley and Jenny — just in time for Lori to leave them another clue: TPRJLM12, traced onto a door.

That number corresponds to a recording of one of Lori’s therapy sessions, but back at the archive, Jenny’s not sure she wants to see it. “We do this together, like we used to when things got bad,” Abbie says, holding her sister’s face and touching their foreheads together. (Sniff!) As they watch their straitjacketed mom rail in the recording, the women clasp hands, just like we saw them do in the flashback. (Bigger sniff!) Lori goes on about how Nurse Lambert told her to kill herself, and as the sisters realize that their mom isn’t behind the suicides, we see the evil nurse cozying up to a new patient: Irving.

JUST SAY NO TO PHANTOM DRUGS | Nurse From Hell sweet-talks the former captain into taking some pills and then trying to drown himself; thankfully, the Mills and Hawley stop him in time. “Suicide seemed like the only thing to do,” he later tells Abbie, and she replies that the drugs he took “open your mind to suggestion, especially with demonic influence.” Um, is that one of the known side effects?

Some research shows that Lambert was found guilty of murder and put to death for similar patient deaths in the 1950s — and Abbie realizes that her mother is trying to stop the ghost nurse from striking again. Lori appears to her daughters once more as they’re exploring her old cell, but Lambert’s right on her apparitional heels: She drags Abbie away and temporarily incapacitates Jenny and Hawley. Lori shows up again, tasks her younger daughter with finding the protective hex in her old journal, then steps in to protect her older daughter from a ticked-off Lambert.

The nurse is just about to stuff those pills down Abbie’s throat (Side note: Are the pills ghostly? If not, how does a ghost gain access to such powerful drugs? Does she have a supernatural prescription pad?) when Lori steps in; the distraction gives Jenny and Hawley enough time to find Grace Dixon’s journal in a box of Lori’s personal effects and chant the hex that destroys Lambert.

When Abbie laments that she didn’t get to say thank you to her mom, Jenny replies, “There might be a way.” So Team WTF — including a recovered Crane — holds a séance in Lori’s old cell. (Side note: Did you notice Ichabod and Hawley’s reluctance to hold hands? Oh boys, throw the fan fic writers a bone, would ya?)

BOOS & CLUES | Mama Mills appears and drops several hints that seem like they’ll be important in the weeks to come. 1) She always knew Abbie was a Witness, and Ab is “meant to go further than any of us.” (If that means Jenny may bite it in a future episode, Sleepy Hollow, you and I are going to have to have words.) 2) Grace’s journal has “a weapon hidden in its pages” that will aid in the Witnesses’ fight.

The entire scene is very tender; the part where Lori fades away and the girls tearfully beg her not to go might have ruined me a little. Beharie and Greenwood, you’re aces here.

But before I can get too verklempt, there’s Irving to deal with: He escaped the psych hospital while Ab and Jenny were communing with the dead, and he wants help. So Abbie lets him climb into her trunk. This’ll end well!

THEY GROW UP SO FAST | Over at Fredericks Manor, Henry goads Katrina into picking up Baby Moloch — “or will you forsake him as you once did me?” he sneers. As she cradles the abomination close, it does something to her that starts to turn her skin putrid; Henry, absurdly, seems jealous as he notes, “It seems you possess the maternal instinct, after all.”

But when the witch realizes what’s up, she quickly throws together a potion that will put the demon spawn out of commission for good. Too bad when she goes to deliver it, Baby Moloch has quickly aged into 5-ish-year-old Moloch, who calls her “Mother” as he lets her know he’s hungry. You’d better act quickly, Katrina, because nobody wants to experience Teen Moloch.