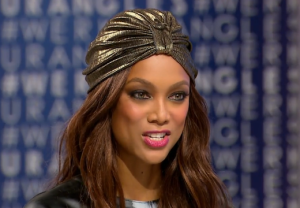 “Booch,” “tooch” and “smize” will remain a part of the pop-cultural lexicon for the forseeable future.

The CW has renewed America’s Next Top Model for a 22nd cycle, the network announced today.

Two other unscripted series — Penn & Teller: Fool Us and Masters of Illusion — also scored renewals, the network announced today. TVLine’s 2015 Renewal Scorecard has been updated to reflect the news.

The network did not give specific premiere dates for the shows’ next batches of fresh episodes, but noted they’d all return in 2015.

Launched in 2003 on UPN — which later merged with The WB to become The CW — Top Model has been the network’s main reality staple for a decade. In its most recent outing last Friday — in which the Cycle 21 field was whittled to five contestants — the Tyra Banks-hosted and -created series drew 1.2 million viewers and a 0.4 demo rating.

For its last two cycles, Top Model opened the doors to both male and female contestants — commonly referred to by Banks as “boochers” and “toochers.” (“Smizing,” for those of you still flummoxed by the intro to this article, is Tyra-nese for “smiling with your eyes”). The CW noted Cycle 22 will again feature a mix of men and women.

While it’s never produced this generation’s answer to Cindy Crawford or Linda Evangelista, the show has launched several acting careers, including those of Yaya DaCosta (Ugly Betty, Lifetime’s upcoming Whitney Houston biopic), Annaleigh Tipton (Manhattan Love Story) and Eva Marcille (The Young and the Restless, House of Payne), among others.

The CW acquired the original British version of Penn & Teller Fool Us and aired them last summer, and has followed up by ordering 13 more one-hour installments of the magic-driven competition series. Contestants who successfully stump the famous duo with their tricks earn the right to perform in their Las Vegas show.

Masters of Illusion, meanwhile, has also scored a 13-episode Season 2. Hosted by Dean Cain, the series focuses on “great escapes, fascinating sleight-of-hand, and large scale illusions, all in front of a studio audience.”

Which one of The CW’s renewals is most exciting to you? Sound off in the comments!