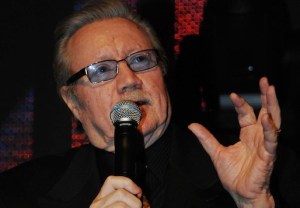 Children of the ’70s and ’80s have lost one of their seminal storytellers.

Emmy nominee Glen A. Larson, who created dozens of hit series including Battlestar Galactica, Buck Rogers in the 25th Century, Quincy M.E., Cover Up, Magnum, P.I., Manimal, The Fall Guy and Knight Rider, died Friday night at age 77 at a California hospital. The cause of death was esophageal cancer.

Larson, who began his show-biz career in the 1950s as a member of The Four Preps singing group, transitioned to TV writing a decade later with an episode of The Fugitive.

His trio of Emmy nominations came in 1974 and 1975 for McCloud (as Outstanding Limited Series) and in 1977, when Quincy M.E. was in the race for Outstanding Drama Series.

Larson also composed the theme songs for several of his hit shows, including “The Ballad of the Unknown Stuntman” (from The Fall Guy), “Knight Rider Theme” and the theme from “Six Million Dollar Man.”