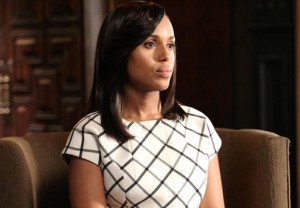 Jake, Fitz and Olivia working together? No doubt about it, Thursday’s Scandal was doomed from the start.

The trio’s goal was simple: Gather evidence against Rowan and bring him into custody at any cost. The plan, however, was less simple, as Fitz and Jake spent much of the hour barking at each other like, well, Fitz and Jake. It wasn’t until Olivia offered herself up as bait — “I’m the shiny object” is so the new “I’m the scandal,” by the way — that the plan actually came together.

(And please note: no one said it was a good plan.)

A 7:30 dinner between Popes was to be the perfect trap, and everything was going according to plan — that is, until Rowan went into monologue mode. At first, it sounded like your run-of-the-mill Rowan speech, like he was reading the most threatening passage imaginable from a yet-undiscovered book of the Bible. But things got real when he revealed that not only was he aware of Olivia’s plan to trap him, but his men were picking hers off one by one outside the restaurant. In fact, he was so ready for action that even the top-secret files David Rosen was asked to acquire turned out to be blank.

And just like that, the most terrifying father on television got up and exited the restaurant. He also, allegedly, exited Olivia’s life, but we all know that bloated puppet master can’t stay away from his little girl for long. And with Mama Pope returning for next week’s winter finale, I’m smelling one ugly family reunion in the works. (Hmm… I wonder what they’ll put on their t-shirts.) 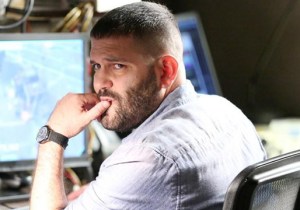 WHAT THE HUCK | Meanwhile, OPA broke the No. 1 rule of problem-fixing and chip-eating: Never double dip! Despite being hired by Lizzie Bear to find out who bugged her phone — hint: his name rhymes with Myrus Meene — Olivia’s team chose to side with the bugger and start spying on her. They discovered she’s been having an affair with Vice President Andrew Nichols, which you’d think would have been the most shocking moment of their evening.

But no, that honor goes to Dan Kubiak breaking into OPA’s surveillance van, only to have Huck squish his head against a broken window and let him bleed to death. And naturally, because Huck is biologically incapable of catching a break, his son witnessed the entire thing. (That ought to go over real well with his mom. And the courts. And the police.)

BOOM CLAP | A car bomb nearly claimed Andrew’s life at the top of the hour, but that explosion paled in comparison to the one that went off in Mellie’s heart, as she renewed herself — and her body — to the Vice President in a moment of extramarital passion. “I’m not the person I was, but if you will give me a second chance…” she pleaded, clearly unaware that Andrew is side-boning Lizzie. (I really hope Mellie DVR’d this week’s episode because there are quite a few things going on she should be made aware of ASAP.)

Other moments worth discussing:

* The only thing stranger than imagining Cyrus going “three rounds” with Michael last week was watching their angry sex scene tonight. I’ll be OK if I never again hear Jeff Perry’s voice barking, “Turn around and bend over,” but sadly, I don’t think I’ll ever stop hearing it.

* Has anyone ever told Fitz that “no” means “no”? His whole bunker-encounter with Olivia (“Kiss me” / “No” / “Come on, you know you want to”) reeked of frat-boy entitlement. That kind of attitude isn’t getting him any closer to Vermont, let’s just say that.

* It was nice when Olivia told Jake, “Don’t ever talk about me and another man and the sun ever again.” It’s nice that they still have a thing.

All right, Gladiators, sound off: What are your predictions for next week’s winter finale? Drop ’em in the comments section below.