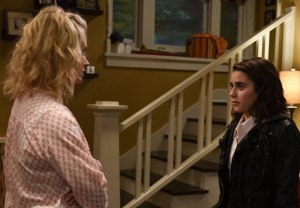 A few months back, I chatted with a friend’s mom about Parenthood — well, more accurately, she asked what my favorite TV show currently was, and I went on a several-minute-long sales pitch for the NBC drama, because nothing is more enticing than the words, “You’ll cry at least once in every episode!”, right?

I recall this story because Thursday’s episode of Parenthood did the exact thing my friend’s mom said it did: It portrayed real life a little too well. In this week’s installment — the last before the Nov. 20 fall finale, which looks like a doozy — those of us watching at home got a spot-on portrayal of (1) the heartache that follows your first unrequited crush, (2) the vicious nature of teenagers (no one asked for your opinion, Dylan’s Rude Friends!), (3) the dark cloud called “financial troubles” that won’t stop looming over your head in adulthood and a myriad of other harsh realities.

Let’s take them one by one, shall we?

RELATED Parenthood Spoilers: Will Joel and Julia Get Back Together?

KISS & TELL | First, there’s Max, who is dealt a crushing blow when he spies Dylan kissing a classmate, Aaron Brownstein, in the kitchen at school. (And at least where hairstyles are concerned, it seems Dylan’s sort of got a type, right?) Max processes the heartbreak in the only ways he knows how: passing out fliers advertising the “menace” Aaron truly is; telling Dylan he’s no longer her friend; and, worst of all, lashing out at Aaron physically after he calls Max a “little bitch,” which is an insult that should probably be left to the comments section of YouTube.

Dylan — who’s already admitted to Kristina that she’ll never like Max in the same way, no matter how fluid the scale of affection might be — is forced to deliver the same bad news to Max, after he approaches her with a handmade poster of Dylan photos. And tells her all the reasons he likes her. And comments on how compatible the Internet tells him they are. Dylan doesn’t take too well to his profession of love — no thanks to her remarkably unhelpful friends! — and Max runs straight out of school, where Headmaster/Mom/Superwoman Kristina follows. She assures Max that what he said to Dylan was so, so brave, even though it hurts right now. (And if it makes you feel any better, Max, I asked my junior prom date if he would go to the dance with me in high school, and it ranks in the Top 10 Most Nervewracking Moments of My Life. Spoiler alert: He and I were not meant to be.)

HATE IS A STRONG WORD | But Max wasn’t the only one dealing with teenage drama. When Hank allows Ruby to stay at her mom’s place without supervision for one night, the whole night falls apart when Hank discovers Ruby lied to his face and threw a party in Sandy’s absence. (She’s a great BSer, though, I’ll give her that. “Watching” a Real Housewives marathon? The party only started out as four friends? I respect your style, girl.)

Fortunately, this parenting obstacle provides yet another bonding moment for Hank and Sandy, especially when Sandy assures her ex that there are lots more “I hate you”s on the horizon for Ruby. Plus, food for thought: Considering Sarah wasn’t around this week, and Mark Cyr is slated to return in next week’s episode, and Hank and Sandy are mending fences… what do we think the endgame is here? Are Hank and Sandy meant to be reunited? Is Sarah slooooowly getting pushed out of the picture? Decide in the comments! (And don’t worry about Ruby hating her dad. She cuts him some slack as soon as the next morning, when Hank sweetly offers to teach her the game of poker.)

MONEY MATTERS | That leaves Jasmine, Crosby, Amber and Drew, who find themselves dealing with more financial woes this week. How bad is it, you ask? The Luncheonette is now California’s No. 1 hot recording studio for cat food jingles. Yeah, it’s pretty dismal. Fortunately, Amber convinces Crosby to see a show at The Elbo Room, where they could potentially sign the show’s headlining band (and, ideally, change their name from Corn-Fed to literally anything else in the world). Considering Jasmine has taken a ho-hum administrative job at her mom’s office just to make ends meet, Crosby decides to take the leap of musical faith with Amber… until Amber experiences what she thinks are labor pains while they’re in line for the club and has to rush to the hospital.

The pains turn out to be incredibly common Braxton Hicks contractions — there’s no way they would’ve let Amber give birth while Sarah was in Napa, would they?! — and after Amber’s worries subside, she assures Drew he doesn’t have to sell his soul to an economics major just so he can help out with the baby. Plus, Jasmine tries her best to convince Crosby that he’s far from a failure — even if his dreams of a Luncheonette success story don’t come to fruition. “We’ll all get our time to shine,” Jasmine promises — and that’s a wrap on Episode 8!

What did you think of the episode? Are you excited for Mark’s return next week? Hit the comments with your thoughts!