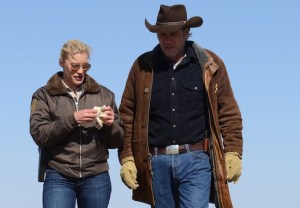 Netflix might be about to put the “long” in Longmire.

The streaming service is in “deep negotiations” to order a fourth season of the Wyoming-set crime drama, which was cancelled by A&E in August, our sister site Deadline is reporting.

Longmire wrapped Season 3 at A&E with an audience of 3.7 million total viewers and a 0.6 demo rating, down 16 and 45 percent from its sophomore finale.

The series seemingly ended with a giant question mark, with Branch confronting his father Barlow about funneling money to “sworn enemy” Nighthorse, and Barlow menacingly noting, “I don’t have time to make another fortune… but I do have time to make another son.” With that, he triggered a skeet trap to distract Branch, right before the ominous sound of a shotgun concluded the action.

According to Deadline, the Netflix-Longmire courtship has not been entirely smooth — “and there is a chance that a final agreement may not be reached.” If a deal is struck, however, production on Season 4 would begin in March.

Back in September, rumor had it that Longmire producer Warner Horizon was focusing its revival efforts on Netflix and Amazon — and to a lesser extent Hulu and Yahoo Screen — as the show’s older-skewing demographic made it a tougher sell to ad-supported networks.

Excited by the prospect of a Longmire revival, or had you made peace with its passing? Sound off in the comments!