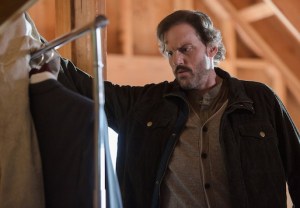 “We had it too easy for too long.”

Grimm‘s Silas Weir Mitchell is fondly recalling Monroe and Rosalee’s Season 3, AKA the lead-up to their Wesen wedding. It’s a measure of how rough life is about to get for the newlyweds — a wolfy Blutbad and a foxy Fuchsbau — that their somewhat fraught path to the altar seems like a cakewalk in comparison.

After all, even the most strenuous parental objections are nothing next to angry, intolerant strangers spewing death threats — all because the pair married outside of their Wesen species and happen to have a Grimm as a best friend.

“The long and short of it is that [intermarriage] is very frowned upon in certain quarters” of the series’ supernatural community, Mitchell tells TVLine.

This Friday’s episode (NBC, 9/8c), as well as the one that follows, finds the happy couple facing some very unhappy sentiments from their peers — “to say the least,” Mitchell says. Read on as the actor previews Monrosalee’s tough honeymoon period (and whether they’ll eventually get their romantic getaway, after all).

The show is interesting in that it reflects our world in a very real way. When you’re dealing with an issue and you can use a slightly mythical brush with which to paint the story, you can hit notes that you can’t necessarily hit if you’re doing a show that is utterly placed in the world we live in on a daily basis, if you’re in a law firm or a kitchen or hospital… As there is a subset in our world, there’s a subset in Grimm that finds interracial stuff to be distasteful. They find it to be sort of criminal.

TVLINE | The description for next week’s episode says that the threats heat up.
Yes. There’s violence. I hate giving stuff away but it’s basically the intensity of the hatred really takes off. It becomes ugly. You see the ugliness of how people can be.

TVLINE | Does it put Monroe or Rosalee in danger of losing their lives?
Yes. It gets very serious.

TVLINE | Is there resolution by the end of the arc?
I don’t even know. I mean, there’s a resolution of a sort. I think it could go on for some time. It’s a pretty rich vein. [Laughs] Hatred is a really great narrative tool.

TVLINE | Are those two kids going to get a honeymoon? Is it going to happen?
I’m not going to say anything about it. I’m sorry. I know you want a scoop but I got to leave some it to the fun of not knowing.

TVLINE | And now I’ll bug you with the question everyone bugs newlyweds with: When are you guys going to start a family?
[Laughs] Not right now. Bree [Turner, who plays Rosalee] keeps saying, “Jesus, if they make me get pregnant in the show after I was just pregnant in real life,” she’s going to have a minor breakdown. Just a small aneurysm. Again, I really don’t know.

TVLINE | Is that something you’d like to see happen for the two of them?
I think it would be a great storyline. Again, there’s a lot there. The fans are really invested in our relationship, which is so much fun for an actor, to know that people are really paying attention. I think it would be a really fun storyline, but it’s so beyond my control and out of my hands that I can’t even really speak to it yet.