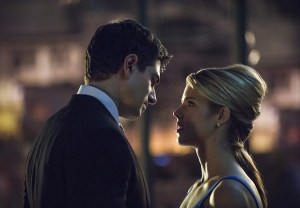 By now, Arrow fans have probably seen the promo hinting at a smooch between Felicity and Ray.

But did you know when the blonde’s boss asks her to be his date to a work dinner, he also picks out a dress and some fancy jewels for her? At least that appears to be the case in the following photos from next Wednesday’s episode (The CW, 8/7c), which also features Arrow-obsessed stalker Carrie Cutter, aka Cupid (played by Supernatural‘s Amy Gumenick).

So will the professional evening out lead to something more?

“We couldn’t do a Cupid episode without doing something romantic,” executive producer Greg Berlanti told TVLine after his Film Independent panel on Wednesday night.

Click through the gallery to see Ray in all his shirtless glory, Cupid setting her sights on the Arrow and more.