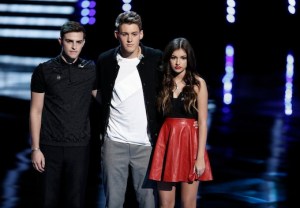 The Voice, despite its rep as a feel-good, even-the-losers-win kinda party, is essentially the slasher film of the reality singing-competition genre.

Indeed, you don’t want to get too attached too quickly to any of the young pretties who make their way to the red-chair zone. After all, in the last month alone, Season 7’s Top 48 has been sliced, hacked, garotted and bludgeoned down to a lean, mean dozen finalists.

Oh sure, Gwen Stefani had a point tonight when she insisted — in a moment of startling candor — that “it doesn’t even matter who the winner is: They still have to put in the work after the show, and this is just a platform to learn.”

But despite the fact that “first place” is not necessarily synonymous with “greatest post-show success,” let’s be honest: Each and every one of the 20 vocalists who participated in this week’s Live Playoffs would’ve sawed off Carson Daly’s left arm for another week of performances in front of 15 million viewers.

But the format is what it is — and the format is still straight-up killing it in the 18-49 demo — so let’s recap how each coach’s team culled their ranks tonight.

TEAM BLAKE
Saved by America: Reagan James, Craig Wayne Boyd
Saved by Blake: Jessie Pitts
Eliminated: Taylor Brashears, James David Carter
Snap judgment: Blake said his decision was made “solely based on who I think can thrive in this environment.” Which I’d translate as, “Sorry, I usually go the country route, but the iTunes singles chart tells me there’s something about Jessie…” Which is why Blake remains the smartest strategist in the Voice coaching stable.

TEAM PHARRELL
Saved by America: Luke Wade, DaNica Shirey
Saved by Pharrell: Sugar Joans
Eliminated: Jean Kelley, Elyjuh René
Snap judgment: Pharrell’s inspiring speech to his artists — “it’s up to you to maximize this incredible NBC airtime,” he declared, before encouraging them all to stay in L.A. and beat down label chiefs’ doors — was nevertheless a time-killer leading to the inevitable. He loves Elyjuh, after all, but he practically worships Sugar. And when America wisely gave a thumbs up to DaNica, the result was a foregone conclusion, and one with which I begrudgingly agree. I mean, I wish Elyjuh got the third spot on Team Gwen, but I don’t think there’s any way he was ever gonna win this thing.

TEAM GWEN
Saved by America: Taylor John Williams, Anita Antoinette
Saved by Gwen: Ryan Sill
Eliminated: Bryana Salaz, Ricky Manning
Snap judgment: Gwen told the audience she was still nursing her youngest — and therefore in an emotional way. But short of a frying pan to the head — or a warning from producers that the show needs to appeal to the One Direction-loving demographic — there is simply no excuse for her decision to save Ryan, the weakest member of the entire Top 20, as far as I’m concerned. Well, girlfriend will learn her lesson when America nixes the perky-but-not-ready-for-this-jelly fella next week.

TEAM ADAM
Saved by America: Damien, Matt McAndrew
Saved by Adam: Chris Jamison
Eliminated: Mia Pfirrman, Taylor Phelan
Snap judgment: I’m shocked, but not upset, that Adam saved Chris — a contestant who was saddled with an almost impossible song choice on Monday. Is it possible Chris will wind up an 11th-place footnote by this time next week? Yeah, sure. But I wouldn’t be shocked if he’s still with us come Thanksgiving, either.

What did you think of this week’s Voice results? Take our poll below and tell us who you’ll miss most, then continue the discussion in the comments!