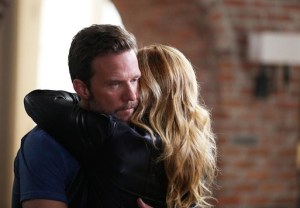 Give Nashville‘s Rayna Jaymes 48 hours, and she’ll make wedding arrangements, business decisions, plans for national press coverage and an appearance on Dancing With the Stars.

But she will not find a way to make her fiancé happy. (That task gets harder by the day.)

The problems in Rayna and Luke’s relationship don’t get any better during their first weekend together after a months-long absence — and I can’t imagine the tell-all interview she grants Rolling Stone about her relationship with Deacon will help ease intra-Ruke tensions.

In other Music City insanity, Will and Layla’s reality show debuts, and Gunnar better stock up on applesauce and French fries, because his kid is about to become a permanent houseguest. Read on for the major developments in “I’m Coming Home to You.”

HOME SWEET HOME | Luke’s tour returns to Nashville, and all anyone can talk about is how little they want to do during the approaching weekend. Luke is jazzed that Rayna will be back in town, too, after her appearance on Dancing With the Stars — remember, the one she booted him out of in the previous episode?

Ray does indeed sing a new single, “Lies of the Lonely,” on the reality series while some of the pros cavort on the floor in front of her. But seriously, all I can focus on is Connie Britton’s cleavage. Damn, lady. Well done. Then she’s on a plane and home in Nashville the next morning in time to join the extended family — Maddie, Daphne and Luke’s kids Sage and Colt — for breakfast.

Luke immediately suggests they ditch the kids with the nanny so he and Rayna can go upstairs and bone. She’s on board — way to achieve that family bonding to which you’ve been paying lip service for the past 10 minutes, guys! — but has bad news: Rolling Stone wants to do a cover story on her, so she’s going to have a reporter in tow for the better part of their limited time together. But she promises they’ll still do all the wedding planning and naked funtimes they talked about.

GOT YOUR NOTEBOOK READY? | Rayna proceeds to give the Rolling Stone reporter the story of his dreams by inadvertently exposing him to: pregnant-and-pissed Juliette (“You think he’s gonna write me as a hormonal headcase?” Ju asks the redhead. “Probably,” Rayna replies. Ha!); a Ruke fight, complete with a very childish Mr. Wheeler all but kicking the floor as he throws a tantrum; and — most juicily — future stepsiblings Maddie and Colt making out on the couch with the lights down low.

In a last-ditch effort to get the reporter to forget what he saw, Rayna offers him an even better exclusive: “What if I give you the story of Deacon Claybourne?” The epic story of a beloved former celebrity couple in exchange for not writing about some stupid kids? Reporter guy, who’s already been turned down by Deke, nearly pees himself in excitement.

When Rayna returns home, Luke thanks her for protecting their kids. My anticipation of how much he’ll freak out when that Rolling Stone issue hits the stands is so delicious, I want to eat it like a cupcake.

IT’S NOT YOU, IT’S DEKE | Deacon, too, will probably blow a gasket when he finds out what Rayna did. But for now, he’s got a bad cold and only fights the NyQuil haze long enough to give 1980s Ilene Kristen Pam a polite heave-ho, which she totally knew was coming.

INSTA-KID | In the two months that have passed since the previous episode, Gunnar and Kiley apparently told Micah he’s Gunny’s son. And things are so settled now that the boy routinely spends time/nights/weekends at his father’s house, much to Zoey’s bitchy dismay.

When Kiley tells her long-distance boyfriend about her son, he breaks up with her. Gunnar assures her that it’ll be all right, and she’s pretty sure it will be… because she packs up the car and dumps Micah with his dad, telling Gunnar that the kid is better off with him. God, I love it when this show turns the crazy up to 11 without much warning. (See also: Deacon’s bandmate who all of a sudden was a would-be rapist in Season 1.)

REALITY BITES | Will and Layla have a very adult reunion when he comes back into town; he even goes to watch her play some of her new stuff live, and he’s shocked when it’s actually pretty good. Later that night, she even thanks him (!) for giving her a life experience she can use in her songwriting. But when they attend the premiere of their reality series “Love and Country,” she’s upset that the show portrays Will as a shirtless, glistening hunk (open your eyes, honey), and she’s made out to be Jessica Simpson, circa the Chicken-of-the-Sea-Newlyweds heyday. Wenchy producer lady doesn’t care, because the show’s a hit — what ratings system are they using that coughs up such instant results? — and she hints that their contracts oblige them to tape another season.

DEEP, CLEANSING BREATHS | Avery stays true to his word and is there for the baby — such as when he attends an obstetrician appointment and buys a top of the line crib — but he doesn’t want anything to do with Juliette. This causes Ms. Barnes much emotional pain; Rayna advises her to channel it into a song, because her latest ones blow.

Ju asks her assistant Emily to be her birthing partner, which is sweet, but Em knows that Avery should really be there for his baby mama. So she makes a plea on Ju’s behalf — if Avery’s going to be part of this, he’s got to be there for Juliette as well as the child — and he surprises Juliette by showing up for the first in-home practice session. Watching the two of them feel the baby kick, by the way, is pretty great. I may be overly optimistic, but I do not fear that these two aren’t going to get back together eventually. Let’s just hope it takes less time than it’s taking Rayna and Deacon…

BACK ON MY FEET | Scarlett’s homeless friend, Terry, swings by the house and leaves her a harmonica as thanks for the job and food (and as an apology for storming away when she asked about his family). Turns out, he was a professional musician who was on the road around Thanksgiving 1993; when his wife and kids drove to see him, they were in a collision that killed them all, starting his downward spiral.

Though he’s gotten a job and cleaned himself up, Scarlett talks him into spending some time writing a song with her. They later perform it together at The Bluebird, and I start to wonder why Scar’s so twitchy on stage and then I suddenly remember the cringing-under-the-piano incident and sigh. Please let this scene, during which both Scarlett and Terry eventually relax into the (rather good) song, signify that she’s pretty much over that sad chapter in her life?

Now it’s your turn. What did you think of the episode? Did you miss Jeff and Teddy? What about Sadie? Sound off in the comments!