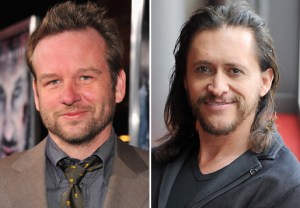 USA Network is looking to add a supernatural thriller to its portfolio of legal and crime procedurals with Evil Men, a drama pilot starring Dallas Roberts (The Good Wife) and Clifton Collins Jr. (The Event), TVLine has learned.

Penned by Daniel Taplitz, the potential series follows an upstanding, middle-class family man (Roberts) whose life is turned upside down when he is approached by a frighteningly powerful entity and commanded to kill “evil men” or see his family — along with his city — utterly destroyed. However, the gleeful psycho (Collins) who is meant to be his first target, instead begins teaching him how to carry out his new destiny.

Taplitz, whose credits include writing the 2004 Jamie Foxx comedy Breakin’ All the Rules, will serve as an EP alongside Gary Fleder (Life Unexpected), Eric and Kim Tannenbaum (Two and a Half Men) and Mary Beth Basile (October Road).

“This supernatural drama is a symbolic tale of good versus evil set in the everyday modern world,” said USA’s Original Programming President Jackie de Crinis. “It is a highly relatable story that begs the question of just how far we would go to protect our families.”