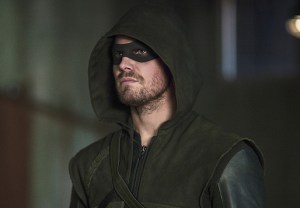 This week on The CW’s Arrow, onetime Starling City vigilante Ted Grant landed in Oliver’s sights, while Roy came to believe that it was he who killed Sara. But first and foremost….

We got the Boxing Glove Arrow. Which obviously must be what showrunner Marc Guggenheim was teasing during this Q&A, about delivering a moment that fans have been asking about since the pilot. Of course, Arrow being the gritty superhero drama it is, having a glove “accordion” out of an arrow would be a bit goofy, so they instead orchestrated an “organic” way for it to come about, as Oliver speared a mitt during a tussle with Ted Grant, before KOing the boxer with his pugilistic projectile. 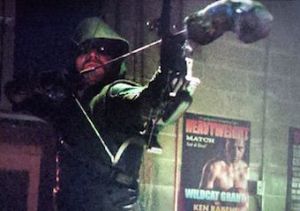 Beyond that glorious, crowd-pleasing nod….

The main thrust of the episode involved the aforementioned Ted Grant, who came under suspicion (by both Oliver and the cops) when a string of murders suggested the handiwork of Ted’s onetime vigilante alter ego, who minded the Glades six years prior. Ted, too, had a “Roy,” a guy named Isaac, until one day his apprentice went overboard and beat to death a drug dealer. Ted cut the guy loose, but now Isaac is back to seek retribution for the torture he suffered at the hands of a drug cartel.

Of course, the other issue at hand as Oliver scrutinized Ted Grant had to do with the boxer’s training of Laurel. Oliver warned Laurel that she was playing a dangerous game by trying to follow in Sara’s footsteps — mainly because she didn’t realize that it’s not a game. But Laurel stuck to her guns and returned to Ted’s gym at episode’s end, with a clear mission: to avenge Sara’s death as well as seek justice outside the courtroom.

Coming on the heels of today’s huge hullabaloo surrounding the Laurel-as-Canary photos, this episode asked: So, are you starting to buy what Laurel is selling?

Elsewhere, Roy grappled with his dream/memory of killing Sara, and to that end had Felicity test his blood for Mirakuru traces. And though he came up clean, Felicity cued up a quasi-autopsy 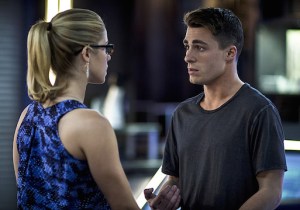 of Sara that at least supported the possibility that someone of below-average height :( had thrown arrows into her — perhaps while burning through the last hints of Mirakuru serum. Roy ultimately shares this hard truth with Oliver, Laurel and Diggle — the latter of whom didn’t want to cut the guy any slack. After all, Dig argues, we can’t have two sets of rules, including one for ourselves. But after Roy helps take down Isaac, he takes that apprentice’s words of warning to heart and beseeches Oliver: “Don’t abandon me,” to which Oliver affirms, “Never.” Rather, Oliver uses a meditation technique taught to him in flashback by Maseo’s wife Tatsu to gain clarity of his distressing memory… which is really about when he arrow’d to death that police officer while OD’d on Mirakuru — a similarly upsetting reality for Roy to grasp.

ARROW POINTS:
* The intersection of “Ninth & Hasen” would seemingly be a nod to “Wildcat” comic book series illustrator Irwin Hasen.
* “Mine’s bigger.”
* “How do you know this guy?” “We used to date.” (Perhaps an overshare for Laurel, since a Google search would surely connect dots for Ted — but then again, he of all people knows the value of a secret identity.)
* “You’re just another weapon in his arsenal.” “Arsenal… Maybe that’s what we should call you.”
* At episode’s end, Arrow’s hottie stalker, Cupid, makes herself known (after laying low in a previous scene), to be featured more heavily in next week’s hour.

What did you think of this week’s episode, “Guilty”?