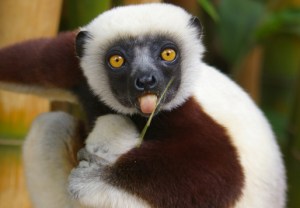 Someone in lemur heaven is getting a fantastic nature lesson right now, that’s for sure.

Jovian, the lemur who starred as Zoboo on PBS’ hit nature series Zoboomafoo, died Monday at the age of 20, the network has confirmed. From 1999 to 2001, Jovian yucked it up opposite Zoboomafoo hosts (and real-life brothers) Chris and Martin Kratt.

“He was very social and calm,” Martin Kratt says of his former co-star. “He was young and good-looking and very gentle.”

According to the Duke Lemur Center, which Jovian called home, the star is survived by partner Pia and brother Julian, as well as seven children and four grandchildren.

If you’re not familiar with Jovian’s work on Zoboomafoo — or if you’re a longtime fan feeling nostalgic — check out a video from the show below, then drop a comment with kind words for Jovian’s family.