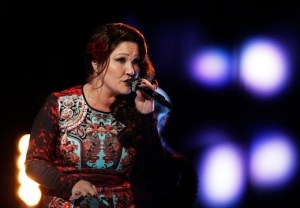 Rumors of a folk legend’s death may get completely exaggerated in the wake of tonight’s installment of The Voice.

I mean, if I hadn’t known better, I might’ve been Googling “Joni Mitchell — still alive?” after No Doubt frontwoman Gwen Stefani started her critique of DaNica Shirey’s “Help Me” cover with by paying lavish tribute to the “Big Yellow Taxi” singer, then somberly declaring, “Joni would’ve liked that”… as if Joni isn’t alive and well and most likely still able to switch on her television set to the NBC affiliate in whatever American city she’s currently residing.

But God rest, er bless, Joni’s soul… the smooth, jazzy riff on her classic 1974 ditty turned out to be the highlight of an otherwise ho-hum Night 2 of the Season 7 Live Playoffs.

I mean, I was really expecting, or at least hoping, that Teams Gwen and Pharrell could continue the non-Adam/non-Blake victory march started last spring by Team Usher’s Josh Kaufman. Now, it’s looking a lot less likely.

Tuesday’s proceedings featured arrangements uglier than a Dexter crime scene, praise more unwarranted than a first-grade art fair, and even Gwen and Adam going momentarily negative in their critiques (then naturally backtracking, apologizing and offering up wilted word salads of subterfuge and slyness.)

In any event, while we’ll have a better picture of how things are going to shake out as iTunes charts get updated overnight, for now let me offer my snap judgments about how the evening went down (bearing in mind I’ll be back overnight to update this URL with more detailed critiques): 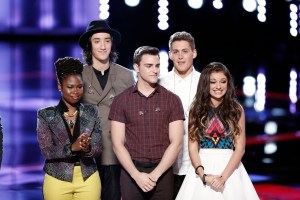 TEAM GWEN
Pimp-Slot Assurance of Advancement (Despite an Utterly Pedestrian Performance)
Taylor John Williams, “Stuck in the Middle with You”
To me, the judges’ hoopla over Taylor John’s performance signaled a victory for interesting-ish arrangement over actual vocal performance. Yeah, the half-time, bluesy feel that Gwen’s obvious fave brought to his Stealers Wheel cover was kinda neat, but THIS! IS! THE! VOICE!, as the show likes to remind us coming out of every commercial break – and dude’s vocal was about as indistinct as white crayon on looose leaf paper. And in the spirit of honesty, while the kid is welcome to interpret lyrics any way he likes — OK, so to him the song is about hanging with his grandma during his parents’ divorce — he didn’t breathe any kind of angst or darkness into the lyrics to draw me into his experience.

The Most Fun Anyone Had All Night (Also a Shoo-in)
Anita Antoinette, “All About That Bass”
Was it a perfect vocal? Who cares?! Anita moved and grooved and sassed her way through a reggae-tinged cover of Meghan Trainor’s uniquitous hit — and in the process, reminded us that good music and good times need not be mutually exclusive. That explosive final refrain of “go ‘head and move along” — along with a series of seriously low booty dips — made this one of the few numbers of the night I’ll be watching more than once.

Things That Make You Say “Eh.”
Bryana Salaz, “Amnesia”
Eh. I mean, credit to Gwen for pushing the pre-fab, pageant-y teen toward darker, less diva-expected material, but the more liberties Bryana took with the melody, the more shrill her tone became. If we must have a teenage belter in the Top 12 — must we, actually? — Team Adam’s Mia is superior.

Song Choice Waaaay Too Big for His Skill Set
Ricky Manning, “Lay Me Down”
Ricky’s Knockout Rounds cover of “Wrecking Ball” was heartfelt and laser-accurate, so I had high hopes he could be a major contender for Team Gwen. But, alas, his voice sounded tremulous and occasionally threadbare trying to wrap itself around the intricate rhythms and muscular range of this so-so Sam Smith cut. (Sorry, I know everyone is #TeamSamSmith right this minute, but “Lay Me Down” is not his best work!) The coaches all used nice words in their feedback, but none of them actually came out and declared Ricky’s end product a slam-dunk. In fact, Blake’s “solid” might’ve been the harshest adjective he used all night.

“A Rook in My Coach’s Game of Chess” Award
Ryan Sill, “I Lived”
Oh, Gwen, did you really use the phrase “boy band” in Ryan’s intro package — and then dress him in a shirt that looked like the love child of a chef’s coat and a straitjacket (paired with baggy leather pants)? I mean, you seem super sweet, but that doesn’t mean you’re not capable of sabotage! Then again, Ryan’s unconvincing cries of “come on!” and “hey!” didn’t do him any favors, either, exposing him as a kid with a decent instrument who has not yet developed the stage presence or believability it takes to win over the voting public. 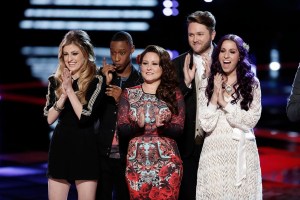 TEAM PHARRELL
Most Likely to Advance
Luke Wade, “Let’s Get It On”
Raw sexuality and the reality singing competition genre aren’t usually a duo you’ll find out behind the bleachers, but Luke somehow managed to take Marvin Gaye’s second most-overt number — thanks, Pharrell, for not going with “Sexual Healing” — and delivered it with just the right amount of playfulness to make it work in this setting. It doesn’t hurt that the versatility of Luke’s instrument — which can soar into falsetto, then suddenly swoop into a growl — will likely allow him to cross into any genre or tempo and make it work. And while this particular number hasn’t answered all the questions he’ll need to answer about “being current,” it certainly indicated he’s a lock for the Top 12.

Performance of the Night (Though Not a Guarantee of Advancement)
DaNica Shirey, “Help Me”
People keep telling me DaNica isn’t “exciting enough” to be a Voice front-runner, to which I ask, “What do we want from her? Should she be jumping through flaming hoops while she sings?!” Phooey! The way her silky tone glided over Joni Mitchell’s complex folk-jazz masterpiece bordered on mesmerizing — and the way she delivered the denouement of “not like we love our freedom” added just the right twist of bittersweet to drive home the song’s uncertain message. Until proven otherwise, I’ve got to believe Pharrell won’t let this gem slip away from us this soon — though there’s still a chance voters will make it a moot point and make her one of the Top 2 vote-getters from his team, no?

Solid (Until Her Voice “Journey” Left the Town of Melody and Veered into Melismaville)
Sugar Joans, “I Say a Little Prayer”
Sugar’s got terrific control — if there’s a note she can’t hit, we have yet to hear it — and a strong sense of dynamics, too. I loved the butterfly delicacy with which she handled the opening verse, and the way it contrasted with the bombast she brought to the chorus. My big problem with the performance, though, was the way girlfriend just hurled the melody out the window and went into ad-lib mode for what felt like the last two-thirds of the tune. Sure, Aretha herself does a lot of hollerating and leaves the hook to her backup singers, but she’s the freakin’ Queen of Soul. The arrangement for Sugar’s cover was pitched so high, that the final set of “this is my prayer”/”answer my prayer” callouts bordered on the unpleasant. There’s no way, of course, Pharrell is going to let her slip away, but veering toward less-expected material and a greater sense of restraint will be the keys to her competitive longevity.

Best Highlight Clip in the Oscar Race for “Wild Overenthusiasm by Reality-Singing Competition Judges”
Elyjuh René, “Latch”
A standing ovation from the judges… for this particular performance? I dunno, people, that should be reserved for things on par with Josh Kaufman’s “Stay With Me” and Amanda Brown’s “Dream On,” don’tcha think? And while Elyjuh’s clear and fluid vocal stylings were more in line with what he did on his Blind Audition to Beyoncé’s “xo,” I’m not going to call him the Team Pharrell front-runner ’til he proves he’s also capable of exhibiting greater restraint and conquering ditties with tighter, more defined hooks (if that makes any sense).

“Competitive Death by Frightful Arrangement” Prize
Jean Kelley, “Piano in the Dark”
I’m not gonna rag on Jean — the only contestant to get actual criticism from multiple coaches tonight — because, to be honest, I have no idea if she sounded good, bad, or somewhere in between on “Piano in the Dark.” And that’s because whatever the band was playing behind her sounded like it was in utter opposition to what Jean was doing with her voice. Girlfriend might as well have been singing “I Will Always Love You” as the music to “The Trolley Song” boomed from the speakers. Yes, I get that Pharrell was trying to update the groove of what’s essentially an ’80s easy-listening jam, but even uber-producers can make missteps. After this debacle — and Jean’s obvious distaste in the pre-performance package for her coach’s song choice — there’s no way Pharrell saves her. But for those of us still enthralled by her Knockout Rounds “Chandelier” (which is still in the iTunes Top 200), her unexpected crash and burn will sting for weeks to come.