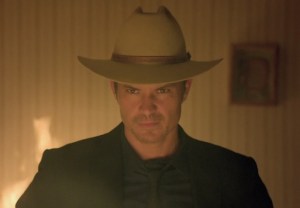 In the latest teaser for Justified‘s sixth and final season, things are quite heated between longtime frenemies Raylan Givens and Boyd Crowder — and the woman they share is doing nothing to cool tempers.

When last we tuned in to the FX drama, Raylan (played by Timothy Olyphant) had strong-armed Ava (Joelle Carter) into snooping on Boyd (Walton Goggins), a bit of marital duplicity that promises to not end well, for someone(s).