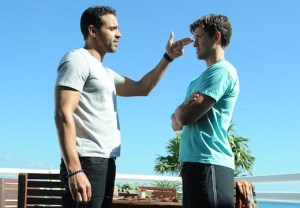 That terrifying flatline at the end of Graceland‘s Season 2 finale? It just blipped.

USA Network announced today that it has renewed its beachy thriller for a 13-episode third season — meaning there will be resolution to last September’s multiple cliffhangers.

When we last left off, dastardly Sid had crushed Mike’s (Aaron Tveit) breathing tube while he fought for his life after a gunshot wound, as Briggs (Daniel Sunjata) rushed in to try and save him. (Refresh your memory with a full episode recap here.)

“This season of Graceland took viewers on a wild ride with unexpected character twists, and a heart-stopping cliffhanger that left a lead character’s fate in question,” said USA Network President Chris McCumber, in a release. “[Creator] Jeff Eastin and the talented ensemble cast deliver on all levels, and Season 3 will undoubtedly continue to keep us on the edge of our seats.”

Excited for another season of Graceland? Sound off in the comments!