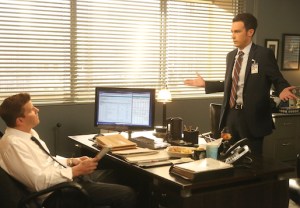 “I read your file. I know what happened to you,” Booth cryptically tells Aubrey in this exclusive sneak peek at Thursday’s Bones (8/7c, Fox) — and by the end of the episode, you’ll know, too.

In the video, John Boyd previews how the “big brother-younger brother” relationship Aubrey and Booth are settling into is a small comfort during a case that brings the newer agent’s rough past to light.

“We get to see a new side of Booth, looking after him,” Boyd adds.

Also of note in the clip: A broken-up Aubrey apologizing to his partner for being “out of line,” and a rather cute Booth-and-Brennan-esque interaction between stars Emily Deschanel and David Boreanaz.

According to the network’s official synopsis for the episode, human remains underneath a merry-go-round lead the Jeffersonian team to investigate a billion-dollar hedge-fund company — and things get difficult when Aubrey feels an emotional connection to the case.

Think you know what skeletons (see what we did there?) are hiding in Aubrey’s closet? Press PLAY on the video below, then sound off in the comments!