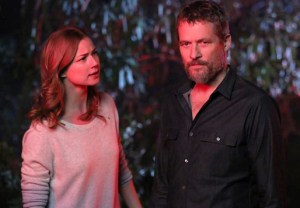 Last night’s Revenge gave us a taste of Emily’s resentment towards her father, but ABC is clearly saving the main course for next Sunday.

New photos from the Nov. 16 episode (10/9c) find Emily confronting dear ol’ David at the scene of Victoria’s accident — because there’s never just one insanely dramatic event happening at a time on this show — and she looks furious.

And David isn’t going to be her only concern for long; per the episode’s official description, the FBI begins to close in and “a mysterious new enemy strikes.” (Because that’s exactly what she needs right now, a new enemy!)

Browse photos from Sunday’s episode below, then drop a comment with your theories: How will Emily and David’s story play out? And what is Nolan up to?