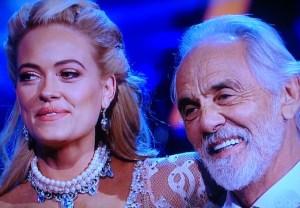 With the prospect of one last, all-but-certain elimination looming — after Michael Waltrip’s merciful exit last week, perpetually low-scoring charmer Tommy Chong was sure to be next, right? — Week 9 of Dancing With the Stars saw the final six couples performing both “America’s Choice” and trio dances. Meanwhile, visions of the Mirrorball Trophy — and more immediately, a spot in next week’s semifinals — danced in the remaining stars’ heads.

But while tonight’s live show tipped its hat to loyal DWTS fans (whose social-media votes throughout the past week dictated each celeb’s song, dance styles, wardrobe and hair), the prospect of ballroom threesomes (each couple chose an eliminated pro or troupe member to join the festivities) also helped raise pulses in the ballroom.

DANCE OF THE NIGHT: Janel Parrish and pro Val Chmerkovskiy | Despite Val’s apparent misstep due to some sticky patent leather shoes, this quickstep was darn near perfection. “That is what a quickstep is,” praised Julianne Hough, before calling it the “dance of the night.” (See, she agrees with us!) “It was almost flawless,” said Bruno Tonioli, while Len Goodman reminded us that hold, posture and movement are essential to a good quickstep, and “you had ‘em all, sweetheart!” This dazzler earned a pair of 9s and perfect 10s from Len and Julianne. HONORABLE MENTIONS: Alfonso and Witney’s perfect paso doble trio (with pro — and Witney’s So You Think You Can Dance comrade Lindsay Arnold) and Sadie and Mark’s (with pro Emma Slater) fabulous foxtrot brought the ballroom and the judges to their feet and earned nothing but 10s from the judges.

RUNNER-UP DANCE OF THE NIGHT: Alfonso Ribeiro and pro Witney Carson | Looking dashing and resplendent in his tux, Alfonso’s foxtrot launched the show in exceedingly high style. Len gushed, “what a way to start the night, fantastic!” while Julianne dismissed her former concerns about his ‘squatty’ ballroom style with this high praise: “You were elegant … tall … vibrant … you nailed it!” A highly enthusiastic Bruno said he “channeled the sophistication of a gone-by era,” before gushing over his surprising “Justin Timberlake touches.” The dance earned trio and 9s and a perfect 10 (from Bruno).

MOST CRIMINALLY UNDERSCORED | Everyone got the paddles they deserved tonight, don’t you think?

WORST OF THE NIGHT: Tommy Chong and pro Peta Meurgatroyd | After a passable start and one lamentable, big stumble at the end, Tommy’s creaky Viennese waltz was ultimately the worst scorer of the night. Julianne lamented the “little trip up” while Bruno mentioned “a few creaky moments” but Carrie Ann Inaba best summed up Tommy’s continued – and baffling — success: “You truly teach us that less is more … staying within what is possible for you, and making everyone else believe in that.” Len affectionately praised Tommy’s spirit, noting, “from one old geezer to another … you are my hero.” The dance earned three generous 7s and a surprising 8 from Len.

“I just feel really great … I feel strong, and I’m anxious to get back to my day job [on ABC Family’s Switched a Birth],” said a gracious Lea of her DWTS experience, before this shout out to Artem: “I love this man… I think he did a great job with me.”