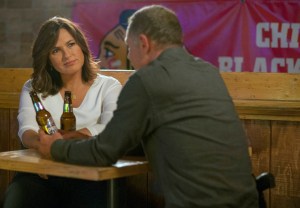 Like a superhero team-up, the firemen, police officers and detectives of NBC’s Chicago Fire, Chicago P.D. and Law & Order: SVU join forces this week for an unprecedented three-show crossover, and some angry sparks are going to fly among the crimefighters. (Hey, even The Avengers had their spats.)

The action kicks off on Fire this Tuesday (at 10/9c), the executive producer explains in TVLine’s first look video, when Severide rescues a victim who’s in possession of a mysterious box. That brings in P.D. detectives Voight and Lindsay, who then travel with Halstead to New York for the SVU hour (airing Wednesday at 9/8c). Following the episode, two strong personalities — SVU‘s Sergeant Benson and Voight — butt heads on P.D. (at 10/9c).

“If you pull that crap again, I promise you: I will arrest you,” Benson warns the morally gray detective.