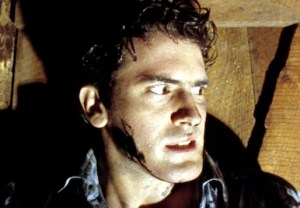 Starz is getting into the Ash-kicking business.

The network announced today that it has ordered 10 half-hour episodes of Ash Vs. Evil Dead, a followup to the horror-movie franchise The Evil Dead.

Bruce Campbell, star of the original 1981 flick, will reprise his role of “Ash, the stock boy, aging lothario and chainsaw-handed monster hunter who has spent the last 30 years avoiding responsibility, maturity and the terrors of the Evil Dead,” according to the network.

Ash Vs. Evil Dead will follow the title character as he goes back to the gory grind after “a Deadite plague threatens to destroy all of mankind.”

“Evil Dead has always been a blast. Bruce, Rob, and I are thrilled to have the opportunity to tell the next chapter in Ash’s lame, but heroic saga. With his chainsaw arm and his ‘boomstick,’ Ash is back to kick some monster butt. And brother, this time there’s a truckload of it,” said Raimi, in a release.

Are you excited to see Ash continue his adventures? Sound off in the comments!