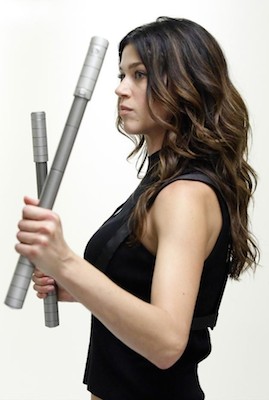 ABC’s Agents of S.H.I.E.L.D. (Tuesdays at 9/8c) dialed it up to 11 with the addition of Barbara “Bobbi” Morse, played by Friday Night Lights alum Adrianne Palicki. The elite undercover operative (code name: Mockingbird) joined the team just in time, as all hands are needed on deck as Coulson & Co. labor to temper the HYDRA threat, as well as crack that confounding alien code.

Palicki spoke with TVLine about tackling the Marvel-ous role, Bobbi’s “complicated” past with Lance Hunter (and possible history with an archer Avenger) and her recent three-pronged attack on screens big and small.

TVLINE | I happened to moderate a PaleyFest screening of your first episode, and when Bobbi busted out her moves and then did the hair flip, the theater went frickin’ nuts.
That’s awesome.

TVLINE | I was sitting near Ming-Na, and I believe she even let out a cheer.
[Laughs] That’s exciting. It’s been so positive, this whole experience, and how the fans have really accepted me into this role.

TVLINE | How did you and the show come together? Were you looking for another TV project?
It was one of those odd things, where I got a phone call that they were interested for me for the part. I went and sat down with the showrunners and I fell madly in love with them. It was scary, a hard choice, because I wasn’t sure if I wanted to do television again seriously [versus a short arc on About a Boy]….

TVLINE | Was there extra hesitation to do another comic books-inspired character?
That was also scary…. I’m still a little hurt from the whole Wonder Woman [NBC pilot] thing. But it’s scary going into any comic book character, because there’s such a high expectation. Especially to be one of the first Avengers introduced into Agents of S.H.I.E.L.D. — that was nerve-wracking in and of itself. But at the same time I was like, “Hell yes!”

TVLINE | Talk about your training 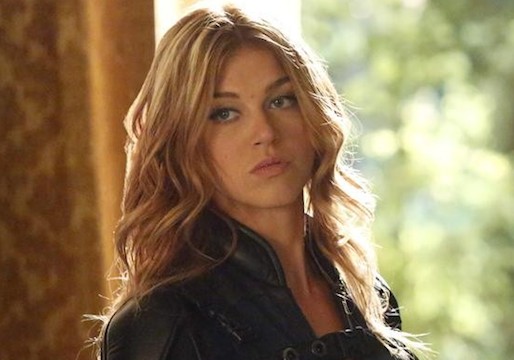 for this role.
I’ve been doing action movies since Wonder Woman — I did G.I. Joe, and now John Wick [in which she plays an elite assasin], so all of that stuff has added to my training. Outside of that, I box and do muay thai and what not. But learning how to use the escrima sticks was a whole other thing. My main training has been on those, because that’s mostly what [Mockingbird] is known for.

TVLINE | Are the ones you wield in a fight scene made of, like, balsa wood, in case you accidentally bop someone?
They’re foam, so when I accidentally whack the stunt guys – which I’ve done more than once… in the face — they don’t bruise or break their nose. [Laughs]

TVLINE | Will we be getting any specifics on the conflict that busted up Bobbi’s marriage to Lance Hunter?
Absolutely. That will come to light in future episodes. It’s definitely complex, as most relationships are. You have two people in this weird world that they live in. When she goes undercover she sometimes uses her sexuality to get what she wants, and he has some insecurities….

TVLINE | In the comic books, Mockingbird married Hawkeye (played in the Avengers films by Jeremy Renner). Will S.H.I.E.L.D. make any reference to her knowing or at least having crossed paths with him?
Well, there has to be at some point. I can’t speak for the writers, but a huge association with Mockingbird is Hawkeye, so I’m sure that will come to light.

TVLINE | Beyond her and Hunter, 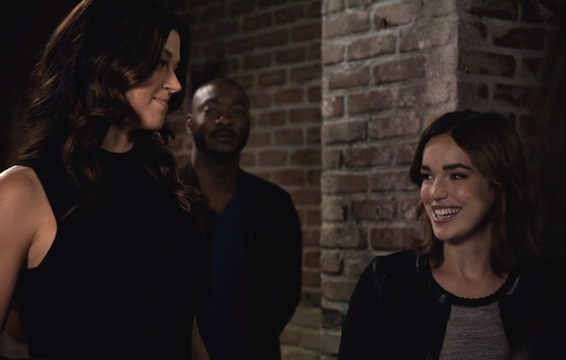 what have you found to the most interesting character dynamic to work?
Well, I love working with Clark [Gregg, Coulson]; he’s one of the most amazing guys, and there’s that whole aspect of “How do they know each other? How did Coulson come to trust Bobbi? Then again, is he trustworthy?” We don’t know. But my favorite, I have to say, is working with Elizabeth [Henstridge], Simmons. I think that relationship adds a lot of vulnerability to the character of Bobbi. They almost have a sisterly rapport, which adds a layer to the character that’s interesting.

TVLINE | What can you say about this week’s episode, in which murder victims turn up with the glyphs on their bodies?
The agents who didn’t know [his secret] see where Coulson is at, which adds to the layers of intrigue. Up until now it’s really just May and Skye who have been aware of his writing.

TVLINE | What about Brian “Bobby Cobb” Van Holt’s tattooed character? Will we get more information on him?
He’s linked to the writing, obviously — he has it all over his body. He’s going to be a big part of the puzzle.

TVLINE | Does Bobbi Morse have an opinion on the Ward situation? Is he redeemable, should he be put down…?
Actually, in this next episode she has a scene with Ward…. Listen, she’s there to do her job, more than anything. She didn’t know Ward on a personal level, but she’s there to support the team, and knowing what Ward has done, she wants to get him as badly as everyone else.

TVLINE | What is the best action sequence you have gotten to be a part of so far? When can we expect it?
The last one I shot, which will be a couple episodes from now, involved multiple S.H.I.E.L.D. agents and was pretty intense. It was one of those things where I was like, “This is crazy. We shot this in a day.” I have no idea how.

TVLINE | That’s what Ming-Na said at Paley, that guest stars from action films are like, “We have 12 hours to shoot this? What?”
That’s how I felt! On movies I’ve done, we do one action sequence in three to five days. This is 12 hours…. It’s insane how much they get done. 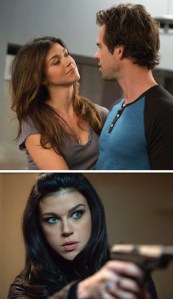 TVLINE | The other week you were on TV’s S.H.I.E.L.D. and About a Boy, and John Wick also opened. Best Palicki Week Ever?
Yes! [Laughs] People were like, “I see you everywhere — what the hell?!” It was really an awesome week. It was kind of a surreal moment, and I appreciated the hell out of it.

TVLINE | By nature of the profession, actors feel lucky to have one gig, and here you had three culminating in one week in the pop culture vortex.
And all different hair colors, by the way!