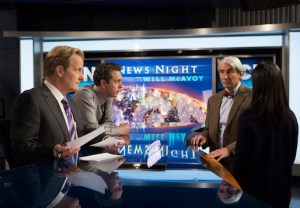 Attention Twittersphere, Reddit users and/or those who dare convey information about current events without the imprimatur of an established media organization behind them: Will McAvoy thinks you’re a joke.

Anyone who’s casually scrolled through any form of social media knows that Will’s mindset — put forth in abundance in The Newsroom‘s Season 3 premiere — isn’t without some merit. The anonymity and speed of the Internet lends itself to the quick dissemination of false information. Sometimes, that’s relatively harmless (seriously, guys, Steve from Blue’s Clues is fine). Other times, as is made clear in this week’s episode, those virtual pitchforks and torches can lead to some very bad situations.

All I’m saying is, Will and the rest of the Atlantis Cable News gang might benefit from taking a deep breath, realizing that the newsgathering environment they so long for hasn’t existed in years and using the tools at their disposal — yes, even Twitter, as a jumping-off point — to tell stories that serve their viewers just as well as the old-fashioned ones did. News nerd rant over: Let’s take a look at what took place in “Boston.”

THE MARATHON BEGINS | We pick up with Will and Mac in his office, discussing their upcoming wedding. She wants nine (!) bridesmaids, one of whom is ABC anchor Diane Sawyer; she exhorts him to find a few more friends — maybe NBC’s Brian Williams? —  to be groomsmen so the wedding party will have equal dudes and ladies. He gives her a hard time, but there’s no teeth in it; this Will is a far happier man than we saw in seasons past. (Thank God.)

Their planning is interrupted when Mac notices something odd on the video feed coming from ACN’s Boston affiliate: As we watch the tape along with her and Will, we realize it’s the 2013 bombing at the Boston Marathon finish line.

Cue the yelling, running around and phone calls that mark every major news event in the ACN newsroom. Don’s at jury duty, but as soon as he gets wind of what’s going on, he goes from normal to obnoxious in 15 seconds and convinces the lawyers and judge to release him. (Side note: As someone who has served jury duty in nobody-gets-outta-it Manhattan, I can attest that this is perhaps the most flagrant alteration of reality that takes place in the entire episode.)

NEWS NIGHT NOW | Maggie — back to looking like her Season 1 self — is working out in the company gym when the text comes in, and before she knows it, she’s heading to Boston as Elliot’s field producer. (Side note: The woman is a proven mess with 1) probable post-traumatic stress disorder and 2) zero experience working a breaking news situation on the ground — of course Jim thinks she’s the best one for the job!)

While we’re on the subject of Harper, he’s living with Vassar snob Hallie, and she apparently works at ACN now. Her job seems to involve being on Twitter all day, because she’s really angry when she has a lot of leads and info about what’s going on in Boston, but none of the senior staff care unless they can get confirmation from an official source like the police or fire departments.

Here’s my first beef with Newsroom‘s anti-citizen journalism stance. I understand not taking a tweet at face value, but in this case, the network has video of the event as it unfolded. It definitely happened, guys. I also understand waiting for an official source to confirm the cause of the blast — rather than pontificating, speculating and generally freaking everyone out — but why wait so long to go to air with the story? As it turns out, the fact that they’re so late to cover Boston is the least of ACN’s problems. But we’ll get to that in a few.

BEANTOWN BEATS | Anyone who was glued to their TVs for those four days in April 2013 knows the basics of what went down, and a lot of it is super scary and/or sad, so let’s skip it and focus on the News Night staff (and friends). Will tries to give a pep talk, but phrases like, “We don’t do good TV, we do the news,” don’t incite his team to greatness. Charlie shows him how it’s done later, when a mistake by CNN’s John King leads to a big reporting error that the rival network then has to retract. “He got knocked down!” Charlie says, shutting down the cheering that breaks out in the ACN newsroom. “We didn’t get taller.” Also, guys, Genoa was like five minutes ago. Let’s chill with the journalistic superiority, OK?

Later on, Maggie gets her big moment when Elliot accidentally eats some walnuts — he’s allergic — and his tongue swells, meaning she has to go in front of the camera to do his live hit. Live TV is ridiculously difficult to do well, and there is absolutely no way that she would’ve nailed the segment the way she does, but whatever. Maybe the LBD Mac lent her is magic? I almost don’t care, so happy am I that Maggie is finally not screwing up. Back in the New York control room, Charlie muses, “Is it just me, or did she age 10 years this week?” Jim is nearly crying with pride and can’t really respond. Um, Hallie? You might not wanna unpack so fast.

Also of note: Will and Mac have a new place, because apparently his palatial, glassed-in apartment that’s bigger than the TVLine offices was just too small for two people… Elliot, despite having grown up in or near Boston, pronounces Watertown “Waterton,” which irks this Northeastern grad to no end… And Don’s pedantic walk-through of all the ways social media is a terrible, horrible, very bad thing — complete with white board — felt like overkill to me. (If you disagree, I’d love to hear about it in the comments.)

SLOAN’S ON THE CASE | Elsewhere in the 24-hour news cycle, Sloan and Don are kinda-sorta together, but she’s only got eyes for the shiny new Bloomberg terminal the cable channel installed in her office. Her machine tells her many things, including the puzzling news that even though she knows Atlantis World Media didn’t make its projected quarterly grown — which should have taken a hit on its stock — shares of AWM are trading up. Ms. Sabbith pairs that information with what Reese tells her earlier in the episode — his twin half-siblings Randy and Blair are in town for their upcoming 25th birthday, upon which they will inherit a significant portion of the company — and she rushes up to the terrace and interrupts an important meeting Reese is having with Will & Co.

“You went to Wharton, Reese. Wake the f—k up!” she shouts at him. “You’re in the middle of a hostile takeover.” God, I missed Sloan. 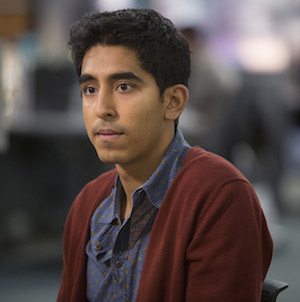 I SPY | That conversation into which Sloan barges is a biggie: Will, Mac and Charlie have just realized that Neal did a really bad thing.

It went down like this: Someone contacted him anonymously, told him to buy a computer that had never been connected to the Internet — a purchase for which Will provided the credit card — and left a flash drive holding thousands of classified documents for him in the toilet tank in a restaurant men’s room.

Some of the stolen government documents prove that the United States Special Operations Command hired a PR team to foment unrest in a West African republic called Equatorial Kundu. (Side note: Nice West Wing callback, Sorkie!) Neal’s mistake was to ask the source for more documents to prove he or she was legit, and then to tell the source how to transfer them.

“You conspired to commit espionage,” Charlie says, incredulously, and Will suggests that they get ACN counsel Rebecca Halliday on the line — pronto.