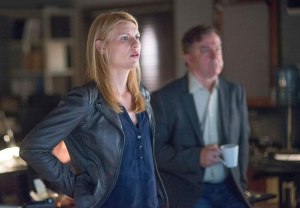 THE EPISODE | “From A to B and Back Again”

THE PERFORMANCE | Carrie Mathison should, by all accounts, be an extremely unlikable character. This season alone, she considered drowning her infant daughter in a bathtub, seduced a relatively innocent teenager under false pretenses (knowing full well it would likely lead to his death), and continued to treat her friends, family and co-workers like crap. But therein lies the genius of Claire Danes. Even when Carrie is at her most unsympathetic, we — remarkably — sympathize with her. Heck, more often than not, we’re rooting for her. And that was certainly the case in this week’s standout episode, in which Carrie was forced to rapidly escalate her plan to track and kill Terrorist-at-Large Haissam Haqqani.

The crux of her morally questionable operation — making her jihad pawn Aayan believe in the power of love and sex long enough to lead her to Haqqani — continued to irk colleagues Quinn and Fara. The former considers it repugnant that she’s “f—ing a child” while the latter thinks Carrie should be a little more concerned about the well-being of “the boy.” It’s hard to find fault with either argument — that is, until Carrie lays out her defense.

After reminding Fara that Aayan is not a “kindergartener” but rather “a grown adult who’s been smuggling drugs to jihadists,” she noted that her controversial relationship with “the boy” would not have been necessary had she “done her job” in the first place. “You were supposed to recruit him,” she barked. “I had to go in after you f—ed that up.”

Danes is never better than when she infuses Carrie with righteous indignation — except, maybe, when she infuses her with subtle regret immediately following a righteous indignation spell. Case in point: After Fara reminds her that she is the reason there even is an operation (“I followed Aayan. I found out Haqqani’s alive,”) Carrie reluctantly stepped off her high horse. Danes’ wordless reaction spoke volumes (namely, “Damn, you’re right. Oh, and my communication skills suck. Sorry ’bout that.”)

Of course, we can’t discuss Danes’ performance in “From A to B and Back Again” without talking about The Scene — the one that began with Carrie watching Aayan get executed by his uncle and ended with her ordering her team to drop a warhead on Haqqani, even though it also meant taking out Saul. Facing opposition from her staff, most notably Quinn, who kept reminding her that “It’s Saul,” Carrie exploded, “Take the shot goddammit, wipe that f—er out!.“

The anger/regret/sadness/guilt/heartbreak Danes packed into those eight words was nothing short of astonishing. Carrie didn’t end up taking the shot, but, man, Danes sure hit the bullseye.

HONORABLE MENTION | Ever since Parenthood kicked off its farewell season, Sam Jaeger has offered us glimpses at the chinks in Joel’s armor. From seeing Julia’s new boyfriend hanging around Sydney and Victor, to hearing the word “divorce” tossed around in a law firm, Joel has slowly unraveled at the possibility of losing his wife for good. That’s why it was especially heartbreaking to watch Joel get unapologetically desperate in Thursday’s episode. And while Joel’s episode-ending profession of love had us dabbing our eyes, it was his quieter moments — holding Julia close during a tearful elevator ride, thanking Zeek for becoming a father figure — where Jaeger truly triumphed.

HONORABLE MENTION | In Sleepy Hollow’s second season, Tom Mison has presented Ichabod Crane as a man increasingly frustrated with the way his fate as a Witness seems to always come at the expense of his marriage. Monday’s episode finally afforded the actor a chance to let Ichabod explode, to show that his genteel manners and effortlessly delivered exposition mask a man who would like the universe, for once, to cut him a freakin’ break. Though Mison started the negotiation with Henry with Ichabod’s usual aplomb, he soon began to show Ich’s desperation for the Horseman of War to undo the spell that was killing Katrina. By the time Ich realized that Henry had no intention of alleviating his parents’ suffering, it was all too easy to see that pain playing out on Mison’s features. And later, that panicked horror on Ichabod’s face when Katrina stopped breathing? And the way Mison let Ichabod start to disintegrate, just a little? Forget NorthStar’s Yolanda — when we want someone to guide us through the warring desires of a conflicted heart, we’ll happily turn to Mison.