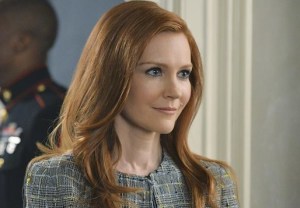 This week on ABC’s Scandal, Abby got a most unwelcome blast from the past (as well as a peek at a possible romantic future…), while Olivia pulled out all the stops to get the truth behind Jerry Jr.’s murder.

‘HOPE’ FLOATS | In the wake of last week’s tease, Fitz wants to talk more about “hope,” but Olivia first needs to know that Jake is getting three hots and a cot in supermax. In the meantime, Liv finagles an off-the-books visit with supermax’d Tom, who likens Olivia, having finally had this chance to really look at her, to Helen of Troy, whose father was also a “god.” But Tom continues to toe the line when it comes to claiming Jake gave the order. Thereafter, Fitz reports back to Olivia on how Jake is being properly treated… and then launches into a shteamy account of he’d treat her if she were to come over and sprawl naked across the Resolute desk. Liv is quite “affected” by his oral skills (there on the phone), but Fitz won’t finish taking her where she needs to go until he gets a better grasp on the whole “hope” thing.

After a guard shivs Tom, he finally gives up Rowan as the true puppet master — though the attack was actually orchestrated by Olivia and Quinn. Olivia brings Tom’s confession to Fitz, and the episode ends with the two of them meeting with Jake in the presidential bunker, to begin plotting against Rowan, once and for all.

EX MAN | When a senator from West Virgina is shamed by a (let’s call it a) “sex” video, Fitz’s pick to replace him is Charles “Chip” Putney, whom the White House press secretary happens to know: “We used to be married,” Abby reports. But Ms. Whelan isn’t as cool a cucumber as she lets on; no, she got physically ill right after the unexpected run-in with her extremely abusive ex. Summoning Olivia, Abby asks, “What am I supposed to say? ‘Mr. President, the man you publicly endorsed for the senate used to beat the crap out of me’…? The president’s needs supersede mine… We need Chip’s votes. It has to be OK.” But it very much isn’t, so Olivia runs, for free, the campaign of Chip’s plain Jane opponent, Susan Ross, ultimately using a commercial starring Ross’ daughter to build viral buzz.

On the heels of a harrowing encounter with Chip in the parking garage — Abby even pulls a gun, ready to use it — and after discounting a pep talk from Liv (“What happened to Monica Lewinsky and Anita Hill after they told their stories?” she argues), Abby is teased by Leo Bergen about Susan’s campaign, which he plans to sabotage with a real “Yahtzee” move. It is then that Abby discloses the pain she suffered — and still does — at her former husband’s hand. Next thing you know, Chip has dropped out of the race, after it is “leaked” that it was he who set up the disgraced, diaper-wearing senator. After toasting the “win” over bourbon, Leo leans in for, and is met by, a kiss from Abby.

ELSEWHERE…. | Cyrus feeds false info to Michael, expecting to see it be publicly regurgitated by LizzyBear… but instead it’s (Lizzy’s puppet) Mellie he hears echoes his words, during a TV puff piece that rubs Fitz the wrong way. The First Lady contends that he wanted the “old Mellie” back, and here she is. Oh,  and the fact that she was chastised for falling down on the job for two months while she bolstered him for 20 years is something she shall never forget…. Quinn confronts Jeremy Winslow about his daughter overhearing something she should not have at his office, then grabbing the folder full of Olivia photos before meeting her demise. Jeremy blows his brains out rather than divulge more info. Later, Quinn and Huck finally reveal the surveillance pics to Olivia. (Seriously, where is this storyline going? Season 4B?)…. Huck’s son traces his online gamer pal’s IP address to Pope & Associates, to say, “I know you’re my dad.”

What did you think of the episode “Baby Made a Mess”? Did Fitz’s late-night phone skillz improve over the hour?