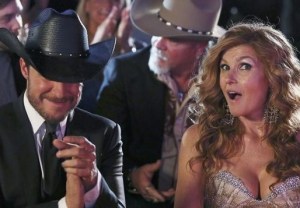 OK, sure, Nashville‘s Rayna and Luke don’t exactly scream “We are having problems!” in these shots from future episodes of the ABC series, but they’re performers, people: They’re used to pasting a smile on a rough situation.

We’ll admit that “Ruke” looks lovely in the photos from the CMAs episode, scheduled to air on Nov. 19. (The real CMAs aired on Nov. 5.) Rayna’s even got her best Taylor Swift face on in one photo (did she win?!), and the rest of the Music City crowd — including Juliette, Sadie, Will and Gunnar — clean up real nice.

However, the official episode synopsis mentions Ms. Jaymes’ finding Luke’s pre-nup, which causes “friction between them.” (And if you’re wondering where Deacon is, per the description, he’s chillin’ at home with Scarlett.)

Pair all of that with the snapshots from the Nov. 12 hour, which seems like it’s fraught with familial tension — did Luke catch future step siblings Maddie and Colt canoodling, perhaps? — and we’re thinking that Thanksgiving in the Jaymes-Wheeler household is going to be quite the stuffingstorm.

Click through the gallery below to see what we’re talking about!