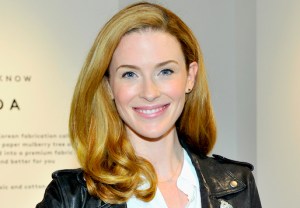 Marvel’s Agent Carter is renting out to Bridget Regan.

The actress — who currently recurs on Jane the Virgin — has joined the ABC drama as Peggy’s neighbor Dottie, Marvel.com announced on Thursday.

The character is described as a small-town girl from Iowa who’ll have a huge impact on the life of the titular heroine.

Set in 1946, Agent Carter finds Peggy balancing administrative work for the covert SSR (Strategic Scientific Reserve) with secret missions for Howard Stark (Dominic Cooper, reprising his Captain America role), all while trying to navigate life as a single woman in America, having lost the love of her life, Steve Rogers.

The eight-episode Agent Carter will debut Tuesday, Jan. 6 at 9/8c, occupying Agents of S.H.I.E.L.D.’s time slot during the winter hiatus.

In addition to Jane, Regan’s TV credits include turns on White Collar and Beauty and the Beast, and Legend of the Seeker.