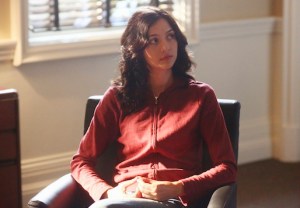 “Little Sam,” you’ve got some explaining to do!

Three weeks ago, you made the How to Get Away With Murder nation collectively yell “oh, Hell, no!” when Annalise Keating found a picture of you standing up and saluting on a dead girl’s phone. But as if that wasn’t bad enough, now it turns out that you may have possibly/probably impregnated said murder victim six weeks before she was found floating in a sorority-house water-tank? You’re kind of the worst, Sam Keating’s Kraken/dingus/disco-stick/Millstone meatsicle. (Thank you, Asher, for the colorful penis monikers. Never change. And always be inebriated from now on, OK?)

News that Lila Stangard was with child at the time of her death — or, as Annalise is probably viewing it, with a womb full of her cheating husband’s DNA — once again calls into question the common refrain of her eager young law students: “I want to be Annalise Keating!”

OK, she’s got a magma-hot hubby who delivers vodka martinis to her desk while she works. She possesses an impeccable wardrobe and Genghis Khan-level swagger that scatter her opponents like dryer lint in a windstorm. And there’s that total lack of pesky moral compass to derail her Perpetual Legal Victory Tour.

But like recently mopped blood splatters in her library, foyer and frameless glass shower, there are tiny traces of ugliness on almost every surface of Prof. Keating’s glamorous life. And they all start to glow like they’d been sprayed with luminol over the course of this week’s episode, the innnnterestingly titled “He Deserved to Die.”

THEY CALL THIS PUPPY LOVE? | Our flash-forward, flipping-cheerleader action focuses primarily on Rebecca — who begins the episode covered in blood splatter and being carried upstairs by Wes to Annalise’s bathroom, where he wipes away the gore and promises her “it’s gonna be fine.” Wes’ expression is borderline turned-on during the process, which is icky, seeing how his colleagues are downstairs with Sam’s corpse and in varying degrees of emotional collapse. And on the subject of icky, did I detect just a glimmer of a grin on Rebecca’s face during their post-cleanup kiss?

We then see Wes leaving Rebecca in the grungy hotel room where she’s instructed to stay and wait and not contact anybody ’til he and his “friends” have disposed of the body. (Naturally, she later dials 9-1-1, then hangs up, because nobody ever does as they’re instructed when left in a grungy hotel room and told to keep their heads down. It’s an unwritten law.) What’s most fascinating, though, is how in this moment of desperation, Rebecca tells Wes she wants to do something to help him out of the crisis. “He wanted to kill me. I had no other choice,” she says flatly. “I had to kill him or he was gonna kill me. I saw the trophy sitting there, I hit him in the head. He deserved to die and I’m glad he’s dead.” Hrmmm. We could accept Rebecca’s word as true testimony, but to me, her “confession” sounds more like a woman brainstorming a way to take the blame for a crime to save her lover — since she’s pretty certain she’s going to jail for Lila Stangard’s murder anyhow. Then again, for those keeping score at home, this now means she’s confessed to both Lila and Sam’s killings — which either makes her a chronic fibber, a homicidal maniac or someone who tells the truth about 50 percent of the time.

THE DEAD, PREGNANT SORORITY GIRL | The case of the week is actually the Lila Stangard murder — and I’m not mad about it. Annalise flies into a fit of rage when Rebecca doesn’t take her witness-prep work seriously, calling her a “slut white-trash killer” and a “piece of garbage” — America’s words, not Annalise’s (riiiight). But things turn serious when the media begins “slut shaming” Rebecca for bedding avowed virgin quarterback Griffin — on the world’s slowest news day, the story makes the front page of the New York Times…above the fold! — and Annalise asks for a gag order for herself, the prosecution and Griffin’s defense. It’s granted, because Annalise is a boss! But Griffin’s lawyer then asks for a second autopsy to look into some curious red marks found post-mortem on Lila’s neck.

What follows is kind of convoluted, to be honest. Evil Prosecutor Lady helps Annalise discredit Griffin’s lawyer’s expert — but then double-crosses Annalise by agreeing with Team Griffin that the marks are consistent with punctures from a woman’s fingernails. It turns out Evil Prosecutor was colluding with Griffin’s lawyer on a plea deal — and so Annalise takes the nuclear option, having Rebecca give an interview claiming Griffin raped her. Now, the saintly QB’s public image is so tainted, Evil Prosecutor Lady rescinds her plea offer. But the judge is all, “Now I want a second autopsy by the examiner of my choosing!” Why the hell not, I guess.

What’s important is the following: Rebecca’s public lies about the rape make Wes very upset and angry — because he wants to help her make a better life, not dig herself deeper into the muck. But then they have hot, steamy makeup sex — or at least, it looked that way until it got inter-spliced with images from Lila’s gory autopsy. Their subsequent pillow talk reveals Wes moved to Ohio from Haiti at age 1 with his mother, that his mother committed suicide when he was 12, and that he likes mint chocolate-chip ice cream (though with that torso, he must not indulge often, right?). I’m not being flip about the suicide, BTW; Wes sneaks it in casually, because sex has bonded him to his neighbor in a way the desire for sex couldn’t quite. But when Rebecca goes out to get Wes’ favorite frozen treat at the local deli, who comes up and approaches her but Annalise’s ex-lover/disgraced former cop Nate. “I know you didn’t kill Lila Stangard,” he says. “We both know who did. Help me catch him.” WHOA, NATE IS NOT PLAYING AROUND!

(I should’ve mentioned it earlier, but Nate previously meets up with Annalise, refuses to help her uncover the D.A./defense attorney collusion and then lets her know he saw Frank plant Lila’s cellphone in Griffin’s car. And she seriously cannot believe someone has outplayed her. Though, then again, by admitting he’s outplayed her — in this round, anyway — hasn’t Nate basically set himself up for a Keating beating, so to speak?)

Anyhow…back to the autopsy. Sam finds Annalise in bed, shuts down her laptop and tries to find the “on” button for her other “equipment,” if I’m not being too subtle. But just as she begins to look interested, who knocks on the bedroom door but Bonnie — it’s official: she’s on probation — and she’s got a doozy of a report from her inside source at the medical examiner’s office. The marks on Lila’s neck were ant bites, she says, burying the lead. Oh, and also, Lila was six weeks pregnant at the time of her death.

Once again, we see the pain and fury in Annalise’s eyes in the face of another lie, another betrayal by her husband. But somehow, with this week’s casual mention of her prior miscarriages and the prior references to their current attempts to get pregnant, the revelation of Lila having been in the family way seems especially stinging.

Here’s hoping next week’s episode kicks off with some “Hell hath no fury” carnage, yes?

IN OTHER NEWS… | Connor bumps into a former hookup in court — but can’t remember the dude’s name. That doesn’t matter to Julian, though, and the two wind up going full “Superfreak” in a bathroom stall. (Color Asher impressed!) Connor’s brain, however, goes the Kylie Minogue route…he just can’t get Oliver out of his head…and finally shows up at Hacker Guy’s door with a bouquet of flowers. Lo and behold, who should answer the door but an incredibly sexy hunk of mocha-chocolata-yaya — holding a spatula (sigh…the dude cooks, too) and casually mentioning Oliver is in the shower. “If you care about the guy at all,” says Connor’s replacement, “don’t ever come back here.” Is this a case of too little, too late? I sure hope not. To paraphrase Samantha Fox, naughty boys need love too.

Meanwhile, Michaela gets invited to prestigious law firm Sterling-White for what she thinks is a verrry early summer-internship interview. Turns out, though, her fiancé’s family has merely cooked up a prenup they’d like her to study and sign. Hey, if she’s going to threaten to ruin Aiden’s life and take all his money if he ever takes another walk on the gay side, she can’t really be too surprised if he’s got some parameters of his own, can she?

And finally, we come to Laurel and Frank, a couple whose intentions I find completely impossible to read. She’s all cozy and coquettish with her legal aid boyfriend — and even thinks about quitting Annalise’s firm and going to work with him to avoid post-kiss awkwardness with Frank. He’s all, “Don’t quit on my account! I’ll stop acting like a wounded, petulant child!” But then, finally, when the moon comes out and they’re alone on Annalise’s porch — must be some powerful pheromonal energy on that property, yes? — Laurel finally admits she’d like to see Frank wearing zero pieces of his three-piece suit. And they go at it like they’re not at their place of work/at their boss’s residence/on a populated residential block of Philadelphia. Alrighty, then!

Quotes of the Week
“Some guys can only get it up for crazy.” —Asher, weighing in on Wes’ attraction to murder suspect Rebecca

“You forgot his name and he’s still into you? What do you have — some sort of voodoo penis?” — Asher, shocked and impressed by Connor’s sexual prowess

“This works on women as well as men.” —Connor, explaining his widespread allure to Asher

“Prayers are for the weak: I’ll stick to beating your ass in court.” —Annalise, dismissing Evil Prosecutor Lady with ease

And with that, I pass the mic to you.

What did you think of “He Deserved to Die”? Who are your current choices for Sam’s murder and Lila’s murder? (I’m going with, respectively, Bonnie and Annalise.) And can we all agree Connor does have a voodoo penis? Sound off in the comments!