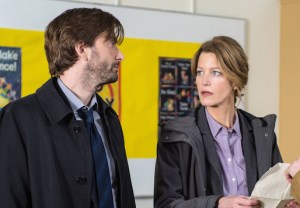 If, with a “scandalous” Thursday drama soon heading into its winter break, you’re thinking about diving into Fox’s Gracepoint murder mystery — but are concerned about having missed the first half of the season — TVLine just became your new best friend.

The exclusive video below recaps the first five episodes of the 10-episode mystery, over the course of five minutes. Who thus far have presented as persons of interest in the tragic death of young Danny Solano? Whose alibis are iffy? Who is still hiding something from Detectives Carver and Miller (played by David Tennant and Anna Gunn)?

The catch-up below will fill in such blanks, allowing you to jump in this Thursday at 9/8c, and then keep tabs on the mystery as it builds to its Dec. 11 reveal of the killer. (And for those already watching Gracepoint, the video makes for a nice refresher.)