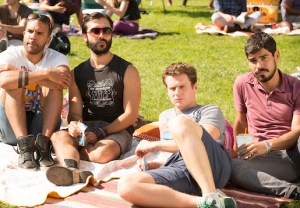 The Girls and boys are back!

That same evening, the gay dramedy Looking will make its Season 2 premiere at 10 pm.

In between, at 9:30, the network will debut Togetherness, a comedy from brothers Jay Duplass (Transparent) and Mark Duplass (The League). The new series follows two couples living under the same roof outside of Los Angeles. Mark Duplass,  Melanie Lynskey (Two and a Half Men), Steve Zissis (Parks and Recreation) and Amanda Peet (The Good Wife) star.

Are you looking forward to the premieres? Hit the comments to tell us about it!