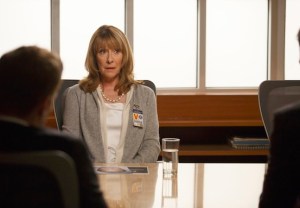 It’s the Downton Abbey–Bones crossover you’ve always wanted but were afraid to ask for!

In the exclusive clip below, Booth and new sidekick Aubrey break the news to Logan’s Sandra Zins that her biddy has bid adieu to this realm, and then the pair promptly start grilling her about her relationship with the deceased.

Press PLAY below and then hit the comments with an answer to this question: Mrs. Hughes — innocent or guilty?