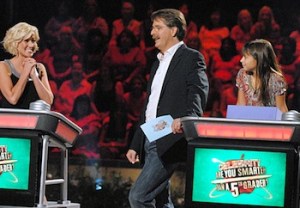 Better brush up on your Common Core — Fox is bringing Are You Smarter Than a 5th Grader? back to its primetime lineup.

Jeff Foxworthy, who hosted the game show when it debuted in 2007, will return as host, with Mark Burnett (Survivor, The Voice) executive producing.

The network has not yet settled on a premiere date or time slot, though it is promising “new twists” for the revival.

5th Grader , which pits adult contestants against the elementary-school set using questions derived from actual 1st- to 5th-grade textbooks, ran for three seasons on Fox and then in syndication through 2011.

“I have loved this competition from our first show and the timing couldn’t be better for 5th Grader to return to Fox, as there is nothing like it on television,” said Burnett, in a release. “Kids today are smarter than ever and the adults who try to take them on will have an even harder task ahead of them.”

Excited about the return of 5th Grader? Sound off in the comments!